Indian officials said floods in Uttar Pradesh were the worst in years and were still assessing the damage to the cane. 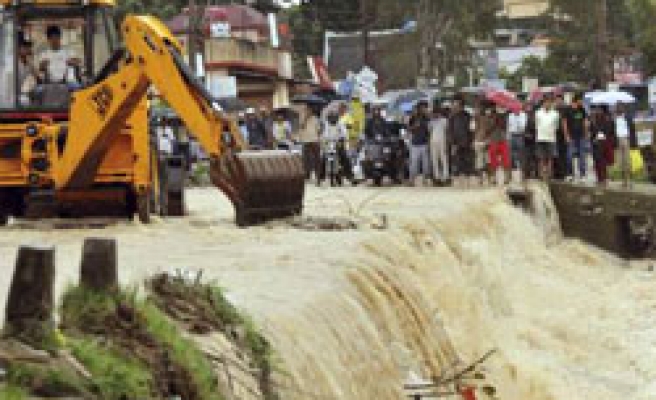 At least two million people in northern India have been left homeless as the Ganges and other rivers, swollen by heavy monsoon rains, broke embankments and submerged villages, fields and religious sites.

They said floods in Uttar Pradesh were the worst in years and were still assessing the damage to the cane.

Any output loss would reduce sugar supply in India, the world's top consumer and second-largest producer of the sweetner, and could push up prices globally.

The Ganges, a dip in which Hindus believe washes away sins, and its tributary rivers have risen to close to their record-high levels and weather officials have forecast heavy rains in the region for the next two days.

"Agriculture fields and many roads are still water-logged... the real estimation would be possible when the water recedes," said K.K. Sinha, a senior Uttar Pradesh government official.

Television pictures showed people leaving villages on bullock carts through submerged roads, while several women and men were seen wading through waist-deep water, carrying children on their shoulders and belongings on their heads.

Farmers in northern Haryana and Punjab told Reuters that heavy rains have damaged cotton boils and fear, which could affect harvesting this year.

"Rains are likely to increase risk of pest attack and disease to cotton, escalating cost of production. It will bring quality of crop and lower its value," said G.S. Butter, director, Cotton Research Centre of Punjab Agricultural University (PAU).

India's monsoon may not start withdrawing this week and with the weather department predicting more rains, state governments have been asked to gear up to cope with risk of heavy flooding.

In the eastern state of Bihar, the Gandak river burst through its embankments in various places, and had flooded vast farmland.

Floods in India kill 1,793 people each year, on an average, and cause losses of $575 million each year, including damaging crops in 3.7 million hectares.