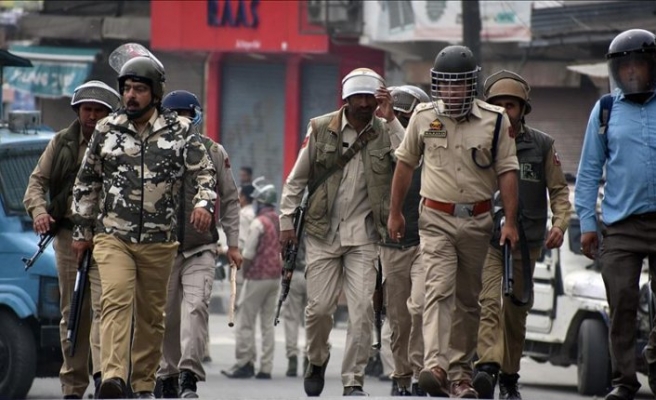 Indian government on Monday imposed restrictions in the troubled region of Jammu and Kashmir.

Former chief ministers, along with several other regional leaders were put under house arrest.

As per the government order, there shall be no movement of public and all educational institutions shall remain closed. There will be a complete bar on holding public meetings or rallies of any kind during the order's operation period.

Former Chief Ministers Omar Abdullah and Mehbooba Mufti would not be allowed to move out of house as strict curfew would be imposed in Kashmir amid heightened tensions and hostilities with Pakistan along the Line of Control, the de-facto border that divides the disputed region between India and Pakistan, news agency Press Trust of India reported.

Kashmir remained on edge on Sunday as authorities stepped up security deployment at vital installations and sensitive areas.

"I believe I'm being placed under house arrest from midnight tonight & the process has already started for other mainstream leaders. No way of knowing if this is true but if it is then I'll see all of you on the other side of whatever is in store," Abdullah tweeted.

In another tweet, he said: "To the people of Kashmir, we don't know what is in store for us but I am a firm believer that what ever Almighty Allah has planned it is always for the better, we may not see it now but we must never doubt his ways. Good luck to everyone, stay safe & above all PLEASE STAY CALM."

Mehbooba Mufti, another former chief minister, tweeted: "Hearing reports about internet being snapped soon including cellular coverage. Curfew passes being issued too. God knows what awaits us tomorrow. It's going to be a long night. In such difficult times, I'd like to assure our people that come what may, we are in this together & will fight it out. Nothing should break our resolve to strive for what's rightfully ours."

The authorities suspended mobile Internet connection in Kashmir Valley, the officials said according to the media report, adding that satellite phones were being provided to police officials and district magistrates.

Amid the ongoing deployment of troops in the Kashmir Valley, the security across Jammu region too has been beefed up with additional deployment of paramilitary forces in the twin border districts of Poonch and Rajouri, officials told the local media.

The Central Armed Police Forces, including the Rapid Action Force, the Central Reserve Police Force, the Indo-Tibetan Border Police and the Border Security Force have been deployed in different districts of Jammu region over the past couple of days to beef up security there amid the lurking threat of terror attack, the report says.

Jammu and Kashmir, a Muslim-majority Himalayan region, is held by India and Pakistan in parts and claimed by both in full.

India on Monday scrapped the special constitutional provision granted to disputed region of Jammu and Kashmir. It also divided the state into two units, which will be called "union territories". They will be ruled by two lieutenant governors.

Since 1947, the Muslim majority Jammu and Kashmir enjoyed special provisions to enact its own laws. The special provision also protected its citizenship law that disallowed outsiders to settle and own land in the territory.