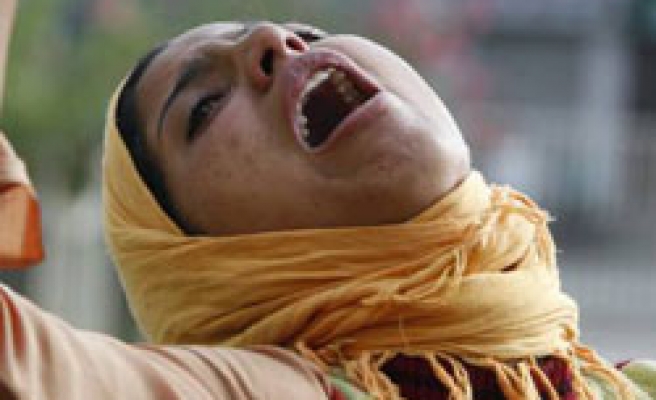 The fatalities added to a string of deaths that have fuelled a rolling series of angry protests across the Kashmir Valley in the past two months.

On June 11, a 17-year-old boy died after being hit by a police tear gas shell. With the latest deaths, the number of people killed in clashes with the security forces stands at 18, many of them teenagers.

Scuffles between the protestors and the police were witnessed at many places.

Several localities in Srinagar, Pattan, Sangrama and other towns were rocked when people took to streets with anti-India and pro-liberation slogans.

At least 50 people including 25 policemen, were wounded across Kashmir during the protests, where thousands of residents took to the streets chanting: "We want freedom! Go, India, go back!"

Authorities reimposed a curfew in the capital Srinagar after noon Muslim prayers and deployed thousands of security forces, who blocked off lanes with razor wire and iron barricades.

The killings came two days after the Kashmir state government ordered a judicial probe into the recent spate of shootings.

The valley has been under strict curfew since the protests started in early June.

The probe ordered by the state government will be led by two retired judges and has been tasked with submitting its report within three months.

The government has also said it will review the cases of all those detained for taking part in the protests.

The All Parties Hurriyet Conference Chairman, Mirwaiz Umar Farooq who continued to remain under house arrest, in a statement, appealed to the Secretary General of United Nations, Ban Ki Moon to send a representative delegation to occupied Kashmir for an on spot study of the situation, Kashmiri Media Service reported.