Giving ammunition to hawks on both the sides against resuming talks, firing across the border has picked up. 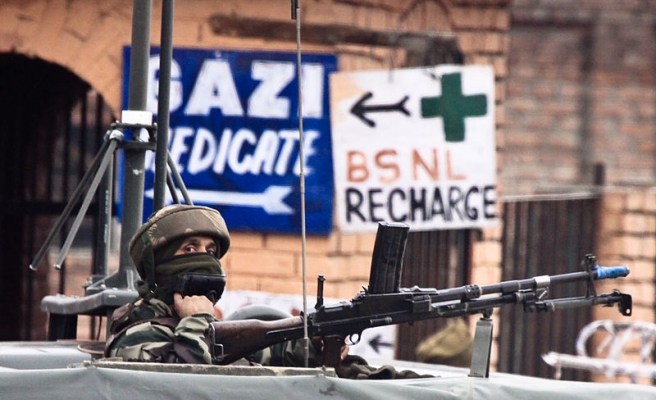 Indian and Pakistani troops intensified firing across the border over the weekend killing at least four, an Indian official said on Sunday, straining ties between the arch rivals who recently called off top-level diplomatic talks.

Last week India said its foreign secretary would not meet with her Pakistani counterpart as scheduled on Monday because of plans by Pakistan to consult Kashmiri resistance leaders ahead of the meeting.

The cancellation dashed any hopes of near-term peace deliberations, chances of which had risen after Pakistani Prime Minister Nawaz Sharif attended the inauguration of Indian Prime Minister Narendra Modi about three months ago.

The Himalayan region of Kashmir has been a bone of contention between India and Pakistan since both countries became independent in 1947. They have fought three wars and came close to a fourth in 2001 and there have been regular clashes on the Line of Control that divides Indian- and Pakistan-controlled Kashmir.

Giving ammunition to hawks on both the sides against resuming talks, firing across the border has picked up.

According to India's Defence Ministry, there have been 70 ceasefire violations by Pakistan in occupied-Kashmir since Modi took over.

Sharma said two people were killed on Saturday and four were injured, including a BSF man. "We gave them befitting reply causing equal casualties on their side," he said.

The Pakistan army's press office did not reply to calls seeking comment. But Pakistani military sources said on Saturday night that in July and August India's BSF had committed 23 ceasefire violations by resorting to unprovoked firing.

Pakistani media reported on Sunday that three people were killed and 11 injured in "unprovoked firing" by Indian troops.

A senior Indian army officer said that they have foiled 15 infiltration attempts this month in which 10 fighters and two Indian soldiers were killed.

The latest firing has forced 1,000 border residents to flee to safer locations, a senior Jammu and Kashmir bureaucrat said.

"Our contingency plans are in place to provide all possible relief to people who might move out of their villages if tensions escalate," said Shantmanu, divisional commissioner of Jammu district.