Political parties have united to ask Hazare to end the 10-day public fast that has drawn thousands of supporters to a muddy expanse of open ground in the capital. 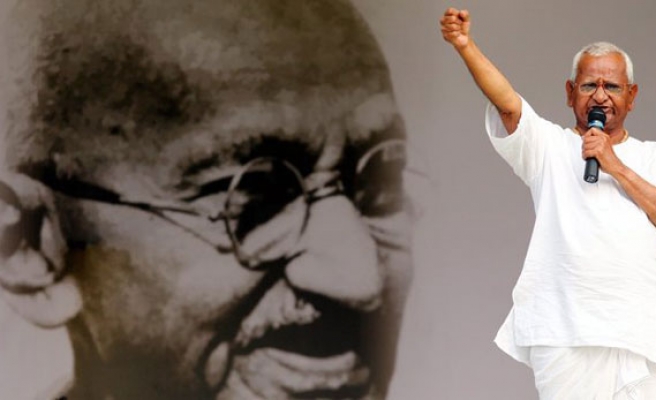 India's Prime Minister Manmohan Singh appealed to an anti-corruption campaigner to end his public hunger strike and proposed that parliament debate his demands after an apparent breakdown in talks with the self-styled Gandhian activist.

The campaign by 74-year-old Anna Hazare has united millions of Indians, including its growing middle class, against a Congress party-led government that has been beset by corruption scandals in its second term, paralysing policy making.

Political parties have united to ask Hazare to end the 10-day public fast that has drawn thousands of supporters to a muddy expanse of open ground in the capital, New Delhi, with increasing concerns about his health.

"He has become the embodiment of our people's disgust and concern about tackling corruption," Singh told parliament. "I applaud him, I salute him. His life is much too precious and therefore, I would like to urge Anna Hazare to end this fast."

But Hazare has so far appeared steadfast in his hunger strike, despite growing criticism that he is holding an elected parliament hostage to his demands.

The government has offered some concession to an anti-corruption bill that Hazare has said was toothless, but negotiations ended on Wednesday without any progress.

Singh proposed on Thursday that parliament debate Hazare's bill as well as the government bill and a third piece of legislation on corruption to help forge a cross-party consensus.

Hazare was well enough to address crowds on Thursday. He has lost nearly 7 kg (15 lbs) since the start of his fast.

"I am sure I will not die until we get the Jan Lokpal (anti-corruption) bill ... I will keep fighting," he said.

Hazare's deteriorating health could force the government to decide on force-feeding him, a move that would risk sparking further protests against a fumbling government of elderly ministers widely seen as out of touch.

With key state elections due next year in the run-up to a general election in 2014, Singh is under pressure to end a crisis that has paralysed policy making and parliament and added to his unpopularity amid high inflation and a run of corruption scandals.

Many of India's fast-growing urban middle class have joined forces with Hazare to protest against a system that requires bribes for everything from driver's licences to birth certificates and has allowed politicians and businessmen to cream off millions of dollars through shady deals.

Several scandals linked to the government, including a telecoms bribery scam that may have cost the state up to $39 billion in lost revenues, led to Hazare's latest protest.