Modi uses hour-long session to promote his Digital India drive and promote his country as a place worthy of tourists, investments & entrepreneurs 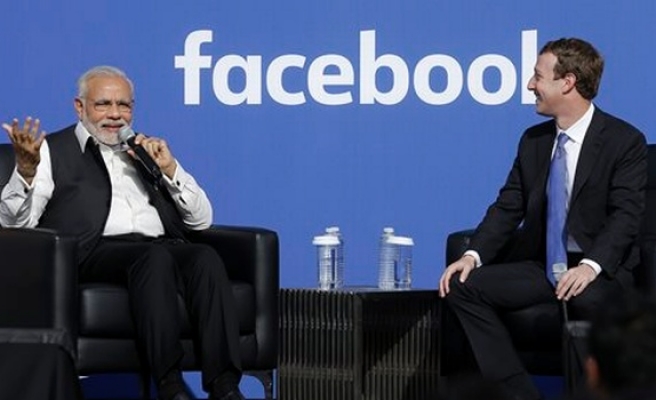 An invitation-only audience jumped to its feet, cheering and snapping photos as Modi strode into a sun-splashed courtyard with Zuckerberg -- sporting a jacket and tie for the occasion, in a sartorial about-face for the typically casual campus.

"To leaders all over the world; you are not going to gain by running away from social media," said the tech-savvy premier during a town hall-style question and answer session.

"The strength of social media today is that it can tell governments where they are going wrong and give them an opportunity to do a course correction."

"You will gain from joining it. You need real time information," said the 65-year-old Modi, who has 30 million fans on Facebook and tweets multiple times a day.

Modi used the hour-long session to promote his Digital India drive and promote the country as a place worthy of tourists, investments, and entrepreneurs with visions of disruptive technology start-ups.

- Choked up with emotion -

But he also shared some candid moments with Zuckerberg, who told of finding inspiration to persevere with Facebook during a journey to India while Modi himself choked up while speaking of his mother.

Zuckerberg pointed out his parents in the audience before asking Modi about his own mother. Modi's mother is more than 90 years old, and his father is no longer living.

The prime minister recounted coming from a poor family, selling tea at a rail station as a boy.

"It is hard to imagine that a tea seller has actually become the leader of the world's biggest democracy," Modi said.

"When we were small, what we used to do to get by," he continued, pausing at times to recompose himself.

"We used to go to neighbors houses, clean dishes, fill water, do hard chores. You can imagine what a mother had to do to raise her children."

Zuckerberg, meanwhile, opened the chat by telling of a time, about a decade ago, when Facebook was going through a "rough patch" and there were thoughts of selling the startup.

He said he visited one of his mentors, late Apple co-founder Steve Jobs, who told him to travel to a certain temple in India.

"I went, and travelled for almost a month," Zuckerberg recounted. "Seeing the people and how people connected, reinforced what we were doing and is something I've always remembered."

Points touched on by Modi during the exchange included the hope of connecting all of India's villages to the Internet with fiber optic cable, and the mighty challenge of attaining equality for women in India.

"If we want to achieve our economic goals, we cannot do that if we imprison 50 percent of our population inside their houses," he said in answer to a question.

"We have to achieve one thing; to bring women into decision making," said Modi, who playfully noted that while most religions portray deities as male, India has no shortage of goddesses.

Modi's stop at Facebook was part of a tour of Silicon Valley, ahead of the UN General Assembly where he will meet US President Barack Obama on Monday.

Late Sunday, he was later to star at an event attended by some 18,000 people in a convention center in the city of San Jose in Silicon Valley.

It is the first time since 1982 that a prime minister of India has visited the West Coast of the United States.

Modi also visited Google's main campus in nearby Mountain View, where he and Google announced a collaboration to provide wireless Internet at railway stations in India, with a goal of connecting 500 by the end of next year.

"Just like I did years ago, thousands of young Indians walk through Chennai Central every day, eager to learn, to explore and to seek opportunity," India-born Google chief executive Sundar Pichai said in a blog post.

"It's my hope that this Wi-Fi project will make all these things a little easier."

Nearly one billion people in India don't have access to the Internet, according to Pichai.