The demonstration was aimed at protesting against the killing of an innocent youth, who was recently beaten to death by Indian Force in the area. 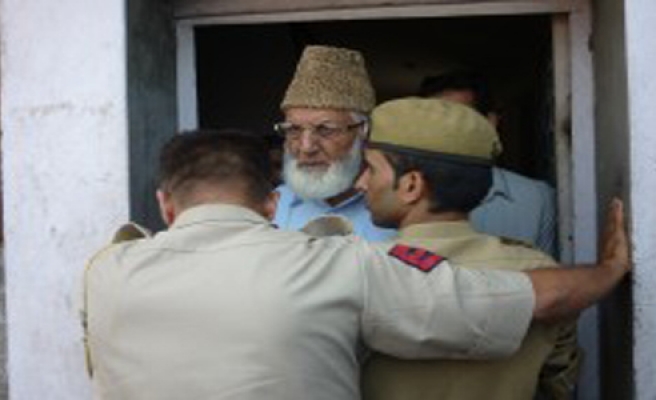 Indian police arrested the veteran Kashmiri Hurriyet leader, Syed Ali Gilani, in Srinagar to prevent him from leading a protest.

Police lodged him at Humhama Police Station to prevent him from leading a demonstration in Shopian, reported on Kashmir Media Service.

Syed Ali Gilani was already placed under house arrest. However, he was taken into custody when he defied the order and tried to venture out of his home.

The demonstration was aimed at protesting against the killing of an innocent youth, who was recently beaten to death by Indian Force in the area.

The Chairman of All Parties Hurriyet Conference, Mirwaiz Umar Farooq, addressing a gathering at Jamia Masjid in Srinagar, said that "India was continuing with its policy of massacre of Kashmiris to suppress their struggle for securing their inalienable right to self-determination."

He said that the Kashmiri people were being killed randomly and deplored that the international community was not playing its due role regarding Jammu and Kashmir.

The Chairman of Jammu and Kashmir Liberation Front, Muhammad Yasin Malik, addressing a big demonstration at Hajan Chowk warned that mass level protests would be launched if the state terrorism was not stopped in the territory.

People on the occasion raised high-pitched anti-India and pro-liberation slogans.

Kashmiris see India as an "occupier" and accuse the ruling of systematic violations, killing dozens of civilians in Himalayan region.