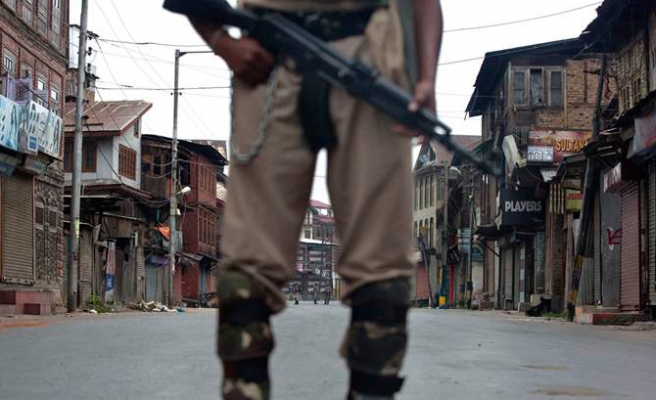 Teams of officers swooped on major newspaper offices in the restive region overnight, seizing printing plates in an attempt to curb news of fatal clashes from spreading as a curfew was extended into its eighth day.

"Police on Saturday night raided the printing press and seized the printed copies of Kashmir Reader," the English language daily said on its website, adding that eight of its workers had been arrested.

Newspaper copies that had reached some distributors in the main city of Srinagar were also taken by police, said Irfan, a local who gave only one name.

"The policemen seized the plates of Greater Kashmir (newspaper) and more than 50,000 printed copies of (Urdu-language daily) Kashmir Uzma and closed down the GKC printing press," said another group that publishes the region's highest-circulation newspaper, adding that three of its workers had been detained.

The disputed territory has been gripped by a week of intensifying unrest sparked by the killing of a popular, young rebel commander, Burhan Wani, in a firefight with government forces on July 8.

"These are difficult times here. This is one of the ways to contain the mayhem," a senior local government official told AFP on condition of anonymity.

Also on Saturday, the Indian army said it had killed three "terrorists" who tried to enter from the Pakistan side of the unofficial border that divides Kashmir between the two countries.

Protesters in the past week have torched police stations and armoured vehicles, and hurled stones at military camps in the restive territory where an estimated 500,000 Indian troops, deeply resented by locals, are stationed.

More than 3,000 people have been injured, including around 200 police, while hospitals have struggled to cope with the rush of injured protesters.

Hundreds have bullet wounds including many who suffered severe eye injuries caused by shotgun pellets fired by the police.

The violence is the worst since 2010 when huge rallies were crushed, leaving 120 dead.

New Delhi has rushed in more troops to contain the violence and flown in eye specialists to deal with injuries caused by pellets.

Muslim-majority Kashmir has been divided between India and Pakistan since Partition in 1947, but both claim the territory in its entirety.

Several rebel groups, including Wani's Hizbul Mujahideen have fought for decades against Indian troops deployed in the region, demanding independence for Kashmir or its merger with Pakistan.

The fighting has left tens of thousands, mostly civilians, dead since 1989 when the armed rebellion against Indian rule began.

The latest unrest has heightened tension between the nuclear-armed rivals, with Pakistan Prime Minister Nawaz Sharif calling on his nation to observe a "black day" on July 19 in solidarity with the people of Kashmir.