Protests swelled across India in support of anti-corruption campaigner fasting to the death in jail, with PM Singh's beleaguered government apparently unable to end the standoff. 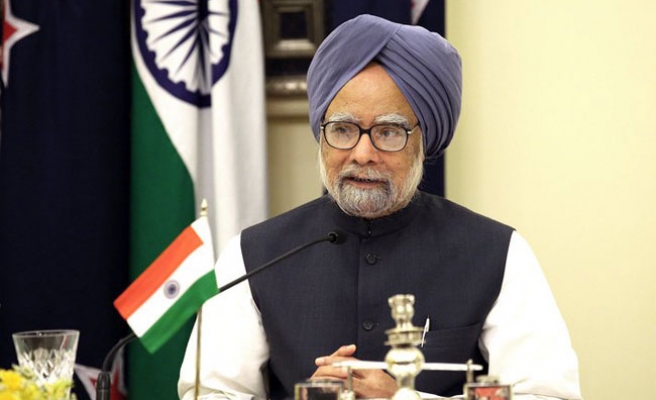 Protests swelled across India on Wednesday in support of a self-styled Gandhian anti-corruption campaigner fasting to the death in jail, with Prime Minister Manmohan's Singh's beleaguered government apparently unable to end the standoff.

An uncompromising Singh, 78, who is widely criticised as out of touch, dismissed the fast by Anna Hazare demanding tougher laws as "totally misconceived", sparking outrage as lawmakers cried "shame".

"It is a wake-up call for all of us unless we put our house in order. The people of this country are becoming restless," said Arun Jaitley, a leader of the opposition Hindu nationalist Bharatiya Janata Party.

The squat and slight 74-year-old Hazare fasted on Wednesday as thousands of his followers gathered outside the jail, the latest development in a crisis that saw him arrested on Tuesday and then refuse to leave jail after the government ordered his release.

Hazare, who has struck a nerve with millions of Indians by demanding tougher laws against rampant corruption in India, insists he wants the right to return to a city park where he had originally planned to publicly fast, before he leaves jail.

The arrest and sudden about-turn to release him appeared to confirm a widespread feeling Singh's government is cornered, clumsy and too riddled with corruption scandals to govern Asia's third-largest economy effectively.

"Corrupt, repressive and stupid," was the verdict of The Hindu newspaper. "Anna has the government fumbling," was the headline of the Mail Today.

Protests spread in support of Hazare, a long-time social activist who dresses in a trademark white kurta, white cap and spectacles in the style of independence leader Mahatma Gandhi.

In northeast Assam state, thousands of farmers, students and lawyers marched. In the financial capital of Mumbai, 500 people carrying the Indian flag and wearing Gandhi caps chanted "I am Anna".

"I was forced to pay a bribe while getting my passport approved and I felt helpless," said student Rahul Acharya, 21. "This is the time all youngsters should join the movement so that the future would be corruption-free."

In the IT hub of Hyderabad, lawyers boycotted courts, students skipped class and hundreds took to the streets.

Demonstrations are part of daily life in the towns and cities of India, a country of 1.2 billion people made up of a myriad of castes, religions and classes. But spontaneous and widespread protests are rare, and the scale of this week's outpouring of public fury has taken the government by surprise.

A stone-faced Singh was uncompromising, but offered little vision in a speech to parliament as opposition lawmakers tried to shout him down.

"I acknowledge that Anna Hazare may be inspired by high ideals," a stern-looking Singh said. "However, the path that he has chosen to impose a draft of the bill on parliament is totally misconceived and fraught with grave consequences for our parliamentary democracy.

"We must not create an environment in which our economic progress is hijacked by internal dissention."

Hazare became the unlikely thorn in the side of the Congress-led coalition when he went on hunger strike in April. He called off that fast after the government promised to introduce a bill creating a special ombudsman to bring crooked politicians, bureaucrats and judges to book.

The legislation was presented in early August, but activists slammed the draft version as toothless because the prime minister and judges were exempt from probes.

Critics say Singh's government of mainly elderly politicians has no idea how to react to spontaneous protests, highlighting a generation gap as social networks like Twitter and Facebook galvanize thousands - including many of India's growing urban middle class, from Supreme Court lawyers to students.

"The leadership is hiding behind men in uniform," Jaitley said.

More protests were planned across India. There were calls for civil servants to take leave and rickshaw drivers to strike and a large protest is expected in Delhi later on Wednesday.

The Congress party held an emergency meeting to discuss the crisis. But the absence of party chief Sonia Gandhi due to an undisclosed illness appeared to have further weakened the government decision-making.

Gandhi left control of the party in the hands of a quartet, including her 41-year-old son, Rahul, widely seen as a prime minister in waiting.

The arrest played into Hazare's hands. Many parties were sceptical about the fast and there has been criticism the activist was holding Indian parliamentary democracy hostage. But doubts about the protest were overshadowed by the arrest.

A weak political opposition means that the government should still survive the crisis, but it could further dim the prospect for economic reforms that have already been held back by policy paralysis and a raft of corruption scandals.

The arrests shocked many in a country with strong memories of Gandhi's independence battles against colonial rule with fasts and non-violent protests.

Opposition figures likened the crackdown to the 1975 "Emergency" when then-prime minister Indira Gandhi arrested thousands of opposition members to stay in power.

The question for many is whether Hazare's movement will grow in the fast-urbanising nation whose increasingly assertive middle class is fed up with constant bribes, poor services and unaccountable leaders.

The scandals, including a telecoms bribery scam that may have cost the government $39 billion, have not only stymied Singh's reform agenda, they have dented investor confidence and distracted parliament just as the $1.6 trillion economy is being hit by inflation and higher interest rates.

Hazare rose to fame for lifting his village in the western state of Maharashtra out of grinding poverty. His social activism has forced out senior government officials and helped create a right-to-information act for citizens.