India raced on Sunday to address complaints of filth and hygiene a week before the start of the showpiece event. 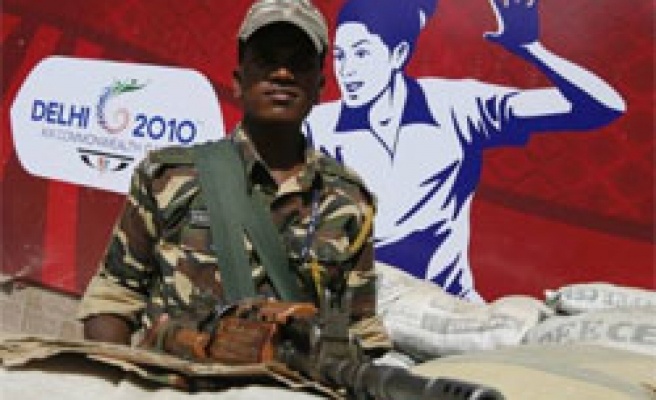 Workers painted walls, drained out rain water and removed a snake at the Commonwealth Games Village as India raced on Sunday to address complaints of filth and hygiene a week before the start of the showpiece event.

The Games were supposed to enhance India's image of a rising power, but shoddy construction, filthy accommodation and security fears have underlined governance and accountability issues, hurting the runaway pride of Asia's third largest economy.

Several top athletes, including world champion sprinter Usain Bolt, have pulled out, taking away some of the shine from the event held every four years.

On Sunday, Indian organising committee officials met to review the work at the Games Village where masons plastered walls while workers struggled to dry out the basement of the Village which sits on the flooded plains of the Yamuna river.

"All finishing work is going on in full swing," said Dalbir Singh, mayor of the Games Village where the athletes will stay.

"It's a world class facility with some minor issues and work is going on to fix those problems."

Indeed, most of the 34 apartment blocs are gleaming and spacious and fitted with Italian marble. But much of what is good about the facility has been overshadowed by athletes' complaints of filth and unfinished work in some of the living quarters.

South Africa's High Commissioner to India Harris Majeke told reporters a snake had been found in the room of an athlete at the Games village.

"That was really a threat to the lives of our athletes," he said, complaining of filth in the living quarters. "When everything is done, then we will ask our teams to come."

The Times Now news channel said about 150 rooms meant for athletes were unliveable.

Indian boxer Akhil Kumar was in shock when his bed caved in on Saturday. It was found the mattress had just been placed on the bed frame without any support underneath.

"Labourers have done a very bad job. They had spit 'paan' (chewing tobacco) on the walls, stains of which are almost unremovable," Lalit Bhanot, secretary general of the Games organising committee, told Reuters.

"We are identifying rooms which are dirty and shutting them down. But we have adequate rooms so there is nothing to worry."

The Games are estimated to have cost $6 billion. India was awarded them in 2003 but did not begin proper preparations until two years ago. Michael Fennell, chief of Commonwealth Games Federation, has said India's image has taken a beating.

Athletes from 11 countries have arrived so far and contingents from seven more nations, including New Zealand and Canada which had delayed their arrival, are expected on Sunday.

The English team, which had checked into hotels because their accommodation was not ready, began moving some support staff into the Village on Sunday. The athletes will follow on Monday.

"Work is on track. About 66 flats will be handed over by tomorrow (Monday) and everything will be complete by Wednesday," Delhi Chief Minister Sheila Dikshit told reporters.

India had hoped to use the Games to display its growing global economic and political influence, rivalling neighbour China which put on a spectacular 2008 Beijing Summer Olympics.

Instead, they have become a major embarrassment for the world's largest democracy, where infrastructure projects have progressed slowly and are a drag on economic growth.

Desperate officials on Friday asked the Indian Army to build a temporary bridge to replace the $1.1 million footbridge that collapsed last week. The bridge, providing access to the main Jawaharlal Nehru stadium, should be finished within five days.

The bridge collapse and an attack on two foreign visitors threw the Games into crisis. An outbreak of dengue has only compounded worries.