Pakistan asserts New Delhi denied entry to train to India for carrying pilgrims to Lahore, India is yet to comment on claim 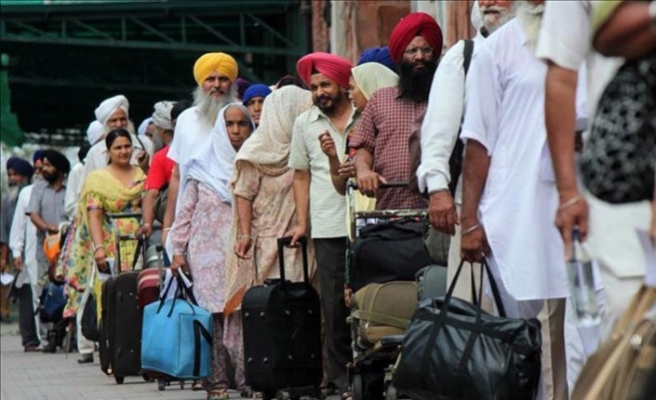 Pakistan on Friday claimed that India prevented some 150 Sikh pilgrims from attending a religious festival in Pakistan.

New Delhi refused to allow “at the last moment” a special train to enter Indian territory to pick 146 pilgrims who arrived at the Atari Shyam Singh Railway Station in Amritsar to leave for Lahore, citing security reasons.

Sardar Ramesh Singh, the chairman of Pakistan Sikh Council, confirmed the incident, regretting that the pilgrims were not allowed to leave India, even after the Delhi-based Pakistan High Commission had granted visas for the three-day pilgrimage.

"This is unfortunate and disappointing. It is purely a religious event, and has nothing to do with politics. Politics should not be mixed up with the religion", Singh told Anadolu Agency.

Before India prevented the pilgrims from leaving for Pakistan, they would visit the Dehra Sahib temple in Lahore to observe the 413th "martyrdom" anniversary of Sikh Guru Arjan Dev from Friday to Sunday, he added.

ML Rai, a senior railway official at Attari Railway station in Punjab, told Anadolu Agency that they didn’t receive the required permission nod from the ministry above mentioned.

“As soon as we will receive the nod, we will clear the issue from our side,” he said.

Pakistan's northeastern Punjab province is home to the five most important pilgrimage sites for Sikhs.

They include the birthplace of Baba Guru Nanak, the founder of Sikh religion, who was born in 1469 in Nankana Saheb district, and Gurdwara (monastery) Punja sahib in Hasan Abdal town, where the handprint of Guru Nanak is believed to be imprinted on a boulder at the monastery.

In November last year, Islamabad and New Delhi had agreed to open a key border crossing for Sikh pilgrims ahead of 550th birth anniversary of Baba Guru Nanak, to be held this year in Pakistan.

Kartarpur Sahib Gurdwara situated in Narowal -- some 115 kilometers (71 miles) from the provincial capital Lahore -- is one of the most revered temple for the Sikh community as Baba Guru Nanak spent the last 18 years of his life there.

The distance between the temple and Gurdaspur is merely three kilometers (almost two miles) but the closure of this crossing costs Sikh pilgrims from India to travel hundreds of kilometers, via Amritsar and Lahore, to reach here.