India 'to shoot on sight' in Kashmir, more troops deployed 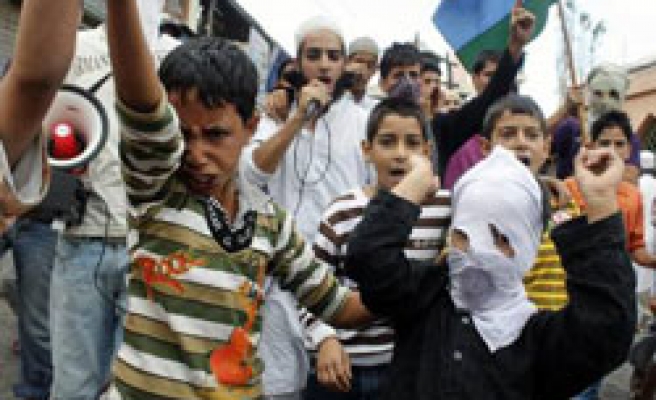 India deployed thousands more federal police across Kashmir on Tuesday after one of the worst single days of "state" violence ans threatened to shoot anyone defying rigid curfew imposed in Himalayan Valley.

Meanwhile, Indian police are patrolling the streets of Kashmir,
using loudspeakers to announce that curfew violators would be shot on sight.

In the northern town of Baramulla Indian-based police attacked on Kashmiri protesters early on Tuesday.

All flights to Srinagar, the summer capital of Jammu and Kashmir state, were cancelled amid security impositions.

The latest deaths are a huge challenge for India and the federal government, which has been criticised for failing to treat the protests seriously.

On Monday, thousands of people in the Kashmir valley defied a curfew to set fire to a Christian missionary school and government and police buildings to denounce reports that copies of the Koran had been damaged in the United States.

One policeman was also killed in the incidents. At least 75 civilians were also injured.

"This violence was in the backdrop of a telecast by a foreign (news) channel about the desecration of holy Koran," Kuldeep Khuda, Kashmir's police chief, told reporters on Monday evening.

Kashmir has witnessed massive demonstrations against Indian rule in the last three months and police have killed at least 87 protesters.

Kashmiris, who have grown up with house raids, police killings and army checkpoints, feel increasingly angry at Indian rule and champion street protests.

While U.S. pastor Terry Jones dropped his plans to burn Korans, there were at least two incidents of damage to Korans in Lower Manhattan in New York Saturday. Two evangelical preachers not affiliated with any mainstream church burned two copies of the Koran in Tennessee.

A majority of Kashmiris favour independence for the region, according to polls.

Iranian TV reports were aired in Kashmir on Sunday about alleged desecrations of the Koran - a grave insult to Muslims who believe the Koran to be the literal word of God.

Local authorities later banned the station from broadcasting on cable channels in Kashmir, where there was already anger at since-rescinded plans by a Florida pastor to burn the Koran.

A prominent Kashmiri leader Syed Ali Geelani called for calm and for Christians to be protected.

Kashmir chief minister Omar Abdullah has urged the federal government to withdraw the act, but has met with strong resistance from the Indian military.

The situation is getting worse by the day.