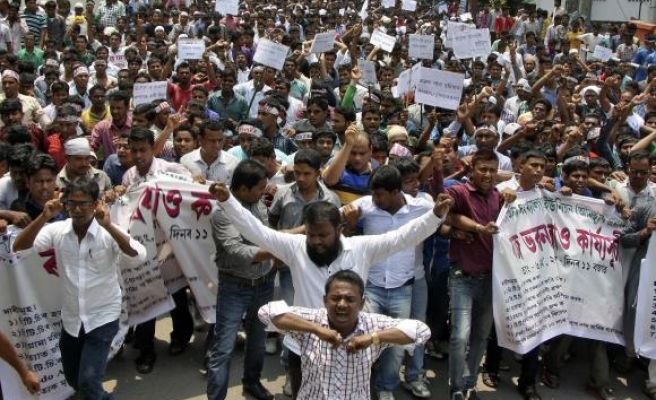 The Indian government’s recent pledge to provide refuge to non-Muslim migrants from Bangladesh and Pakistan has drawn sharp reactions from across the region, especially in India’s northeastern Assam State.

Political parties, student organizations and civil society groups in the region recently took to the streets to oppose the move.

They slammed the Bharatiya Janata Party (BJP)-led National Democratic Alliance government for what they described as “polarizing” the public along religious lines.

“This is a dangerous development, especially for the people of the region who are already suffering from illegal infiltration from neighboring Bangladesh,” former Assam Chief Minister Prafulla Kumar Mahanta told Anadolu Agency.

“We cannot allow this to happen. We must not allow divisions in the name of religion,” he added.

Last month, the central government, citing humanitarian considerations, announced its decision to allow Bangladeshi and Pakistani nationals from minority communities -- who had entered India before Dec. 31, 2014 -- to remain in the country without the necessary documents.

Mahanta, who is also a former student leader, warned that the move violated the terms of the Assam Accord, which deemed all persons to have entered the country after March 25 of 1971 -- irrespective of their religion or caste -- to be illegal aliens.

The Assam Accord was signed in 1985 following six years of bloody agitation by the All Assam Students’ Union (AASU).

Mahanta has called on veterans of the Assam agitation to spearhead the protest against the government’s new pledge.

The AASU, the region’s most prominent student organization, has likewise slammed the government pledge, staging a series of protest rallies across the state to voice its opposition to the move.

“During the Assam agitation, a total of 855 Assamese youths sacrificed their lives to free the state of illegal infiltrators,” Samujjal Bhattacharyya, chief advisor to the AASU, said.

“This government is trying to polarize the nation along religious lines,” he added. “We don’t want illegal foreigners to be categorized according to religion.”

“With this [decision], all efforts to free the region from illegal migrants will have been in vain,” said KMSS leader Akhil Gogoi.

“All dubious non-Muslim citizens who are undergoing trials will get benefits for no reasons [as a result of the decision],” he asserted.

The peasant leader added: “We condemn this policy of the government, which is against the people of the region.”

Assam Chief Minister Tarun Gogoi of the Congress Party, for his part, defended the government decision, but added that Assam should not be the only state to provide immigrants with refuge.

“All other states of the country should share the burden of [providing refuge for] migrants,” he said.