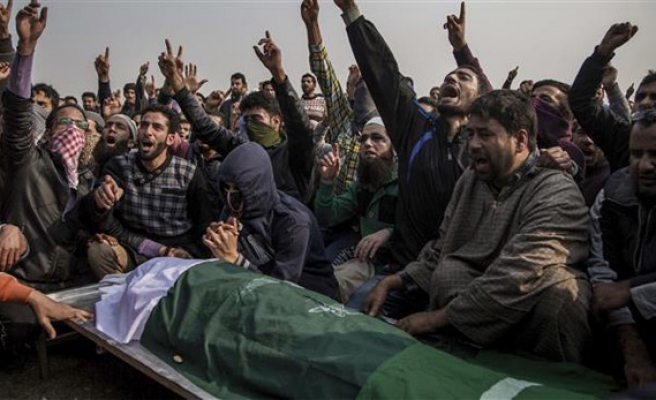 Amnesty International criticized Wednesday the Indian security forces' use of "excessive" and "arbitrary" force against protesters in disputed Jammu and Kashmir.

“Security forces used arbitrary or excessive force against demonstrators on several occasions. In August, Shabir Ahmad Monga, a lecturer, was beaten to death by army soldiers,” the human rights group said in its annual report.

The report highlighted the killing of protesters after the killing of a leader of the Hizbul Mujahideen armed group last July, and how security forces used "pellet-firing shotguns, which are inherently inaccurate and indiscriminate".

It also mentioned the curfew imposed by the Jammu and Kashmir government for over two months during which “private landline, mobile and Internet service providers suspended their services for weeks on orders from state authorities".

"The communications shutdown undermined a range of human rights. Residents reported being unable to reach medical assistance in cases of emergencies," the report read.

Covering 159 countries, the report warned against the growth of "politics of demonisation" and “the ongoing global crises exacerbated by a debilitating absence of human rights leadership on a chaotic world stage".

"Today’s politics of demonisation shamelessly peddles a dangerous idea that some people are less human than others… Divisive fear-mongering has become a dangerous force in world affairs," Secretary-General of Amnesty International, Salil Shetty said.

"2016 was the year when the cynical use of ‘us vs them’ narratives of blame, hate and fear took on a global prominence to a level not seen since the 1930s."

Kashmiri resistance groups in Jammu and Kashmir have been fighting against Indian rule for independence, or for unification with neighboring Pakistan. More than 70,000 people have reportedly been killed in the conflict since 1989. India maintains more than half a million troops in the disputed region.