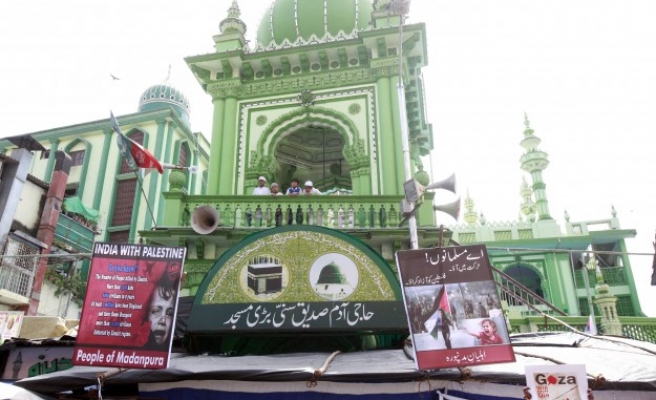 A Hindu hardline group organized an event where almost 60 Indian Muslim families appeared to convert to Hinduism in the northern city of Agra on Monday.

An offshoot of the Hindu nationalist Rashtriya Swayamsevak Sangh group claimed to reconvert the 57 families, a total of around 150 Muslims, at the "Purkhon ke Ghar Wapsi" event, which translates as "returning to the clan of ancestors."

“The ancestors of these people were converted to Islam in the past,” said Ajju Chauhan, state convenor for Rashtriya Swayamsevak Sangh. “All of them still know their castes from their times as Hindus and pray to goddess [of power] Kali.”

“What we have done is not a conversion but returned these people back to their fold,” added Chauhan.

Opposition members of parliament criticised the conversions, saying the ruling party was chipping away at India's secular constitution.

"This house must be assured the constitution of India will not be violated," Anand Sharma, leader of the opposition Congress party told parliament.

"There is a diabolical agenda."

Hindu organisations stir unease among India's minority Muslims who accuse them of a deep-seated bias and say they have become more assertive since the rise to power of the Hindu-nationalist BJP in a stunning election victory this year.

Almost all of the converts have extremely low incomes, making their living by recycling waste, segregating rubbish and working as manual labourers.

They were offered government identity cards showing them to be below the poverty line and thus entitled to cheap supplies of the staples wheat and rice.

AR Qureshi, Assistant General Secretary of the All India Muslim Personal Law Board, said: "I would say that this the RSS working on it's anti-Muslim agenda."

"I do not know the details of the case and I would need to find out about these Muslims, whether they were recent converts or whether their parents had converted to Islam," he said.

Government minister Mukhtar Abbas Naqvi said the opposition critics must allow the police investigation to go ahead and should not jump to conclusions.

"We are as committed to the cause of secularism as anyone else," he said.

Parliament was paralysed for most of last week after a government minister made derogatory remarks about non-Hindus. Modi rejected demands he fire her, saying she had made a public apology.

The large ceremony saw saffron flags flown on rooftops of the slum where it was hosted, with the apparent converts given a ceremonial bath, new clothes and a "purification" ceremony.

Rajeshwar Singh, the regional head for Rashtriya Swayamsevak Sangh, said the group plans to hold a larger event for 5,000 converts on 25 Dec. 2014, and that the group aims to convert people in the region "back to their old religion, by the year 2021."

Agra is in the northern Indian state of Uttar Pradesh which has seen the most incidences of communal violence in the country this year, with 129 by October, Minister of State for Home Kiren Rijiju told parliament in early December.

The state has also been at the centre of a row over so-called "Love Jihad"; an alleged plot by Muslim youth to convert Hindu girls to Islam, according to Hindu hardline groups.