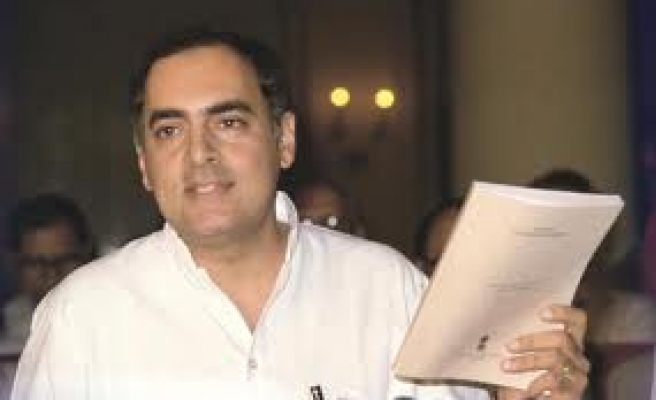 India's Supreme Court commuted death sentences on three men for killing former prime minister Rajiv Gandhi to life imprisonment on Tuesday because of an 11-year delay in deciding on their petitions for mercy.

Gandhi was killed by an ethnic Tamil suicide bomber while campaigning in an election in the southern Indian town of Sriperumbudur in May 1991.

The three Indian men - tried as Santhan, Murugan, Perarivalan - were members of a Sri Lankan ethnic Tamil separatist group, the Liberation Tigers of Tamil Eelam (LTTE) and Gandhi's killing was seen as an act of retaliation after he sent Indian peacekeepers to Sri Lanka in 1987.

The three were convicted of involvement in 1998 and sentenced to death by hanging. A fourth person, a woman, was also given the death sentence but it was later commuted to a life term.

The men appealed for mercy but successive Indian presidents gave no decision until 2011, when their plea was rejected.

"Delay in deciding mercy pleas is one of the grounds to commute the death sentence to life imprisonment," the Supreme Court headed by Chief Justice P. Sathasivam said in its order.

Gandhi's widow, Sonia, is head of the Congress party while their son, Rahul, leads its campaign for elections in the next few months.

Rajiv Gandhi's mother, Indira, was assassinated in 1984 over the army's storming of the Golden Templein Amritsar to crush a Sikh militant movement.

The death penalty remains in force in India despite a long campaign by human rights groups to abolish it. It has rarely been carried out, however.

About 500 people are on death row, many of whom have been there for years.

In November 2012, India ended what many rights groups had interpreted as an undeclared moratorium on capital punishment when it executed a gunman convicted for the 2008 militant attack on Mumbai. Three months later, it hanged a man from Kashmir for a 2001 militant attack on parliament.

The Supreme Court said on Tuesday the administration must move faster on deciding on mercy petitions in the interest of justice.

Last month, the Supreme Court commuted the sentences of 15 death row prisoners to life in jail on the grounds of delay.