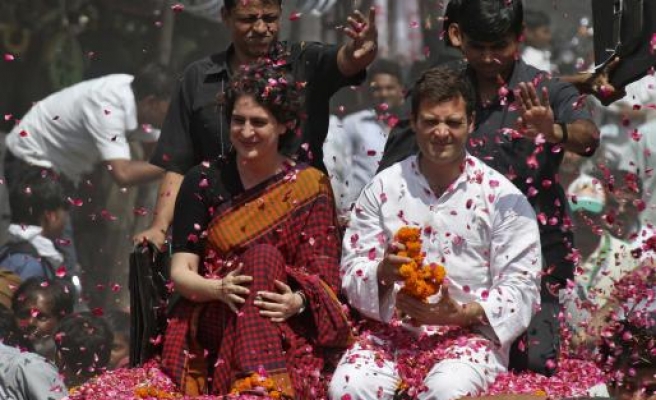 There is no power, there are no nurses on duty and only two doctors - one suffering from a crippling neurological disease - trying to treat 60 to 70 patients a day in sweltering heat.

Few places in India illustrate more clearly how loyalists' support for the ruling Congress party, and the Gandhi family that leads it, has been tested than Amethi, its traditional stronghold around 300 miles southeast of New Delhi.

Many people in a constituency that has elected the Gandhis to parliament since 1980 feel they have been left behind and voters are getting angry, threatening family scion Rahul's bid to retain the seat when locals cast their vote on Wednesday.

"We are with the Congress party, we have always been from the time of our forefathers," said Arun Sharma, a local barber. "But we are not happy. Rahul just comes and waves from his car, and goes away."

Congress leaders disagree, and counter that to a large extent, Rahul's hands are tied.

Uttar Pradesh, the northern state of 200 million people where Amethi is located, is run by a regional party that, while loosely allied to Congress, has ruled mainly in the interests of its low-caste supporters.

The state plays a critical role in building roads and providing power, and lobbying efforts by the Gandhis to secure better amenities for Amethi have often proved ineffectual.

"These health centers and schools - these are the responsibility of the state government," said Rita Bahuguna Joshi, former head of the state unit of Congress and now running on a party ticket from Lucknow, capital of Uttar Pradesh.

"It is the non-cooperation of successive governments that has been the problem. Rahul makes every effort, but they don't implement them. They want to show him in a poor light."

Nonetheless, Hindu nationalist candidate Narendra Modi senses victory in the five-week election that ends next week, and his opposition Bharatiya Janata Party (BJP) is striking at the heart of the Gandhi family in a bid to weaken it.

Modi, who opinion polls show is favorite to be India's next prime minister, has campaigned on a platform of economic growth while criticizing what he views as state handouts by Congress that India can ill afford.

He has also stepped up personal attacks on Rahul, 43, mocking him as a pampered princeling who has failed to back up talk of empowering India's poor with results.

"The question is are they really interested? The arrogance of the family has gone sky-high," Modi thundered to applause at an opposition rally in Amethi on Monday.

"You didn't ask for Mercedes cars, you didn't ask to go to America, all you asked for was drinking water, jobs for your children," he added, taking the fight to the Gandhis in their own back yard.

"But the mother and son couldn't be bothered," Modi said in his most direct attack yet on Rahul and his mother, head of the Congress party Sonia Gandhi.

Adding to pressure on Rahul and Congress, the BJP has put up a well-known television actress to run against him in Amethi. In the past the opposition would tend to field weak candidates, reflecting the futility of the exercise.

Now, youths wearing saffron-colored BJP headbands roam the area on motorbikes shouting slogans in support of Modi, a rare sight in a constituency where the Congress party flag was the only one visible for years.

Sharma, the barber, quit his job at a factory making car windshield wipers because he was earning only 70 rupees ($1.16) a day, less than the minimum wage.

Abdul Ansari, who had come to the barber shop, said his extended family had 20 children and none of them had received an education because the government school had closed.

They could not afford the dozens of private schools that had opened up, some of them in garages.

"The children are on the streets all day, doing nothing."

It is hardly an advertisement for a party that has championed the poor since Rahul's great-grandfather, Jawaharlal Nehru, led India to independence in 1947.

In an interview with the Times of India on Tuesday, Modi said that if Congress' tally dropped to below 100 seats in India's 543-seat lower house - which would be its worst ever result - the Gandhis may face a threat from their own party.

Responding to the onslaught by Modi and the BJP, Congress has deployed Rahul's sister Priyanka, a natural politician in the mould of grandmother Indira, to lead a rearguard campaign in Amethi over the past two weeks.

Party leaders remain reluctant to countenance the possibility of personal defeat for Rahul. Allies also say he is working hard behind the scenes to reform Congress and prepare it for future battles.

"Rahul is here for the long term. In fact he is operating at multiple levels," said Jairam Ramesh, a federal minister and a confidant of the family.

"From day one he has made it clear, in internal meetings as well as outside that, while he is fighting the 2014 election, he is also seeding the future Congress."

Indian political experts also say that Congress has suffered setbacks in the past and bounced back.

"The Gandhi family is the glue that holds the party together, that stops the party from crumbling into factions," said Siddharth Varadarajan, former editor of The Hindu newspaper.