India's hunger striker says ready to die for anti-graft cause

PM Singh pleaded with the 74-year-old to at least agree to go on an intravenous drip, which Hazare has so far refused, and he called a meeting of political parties in parliament to find an end to the impasse. 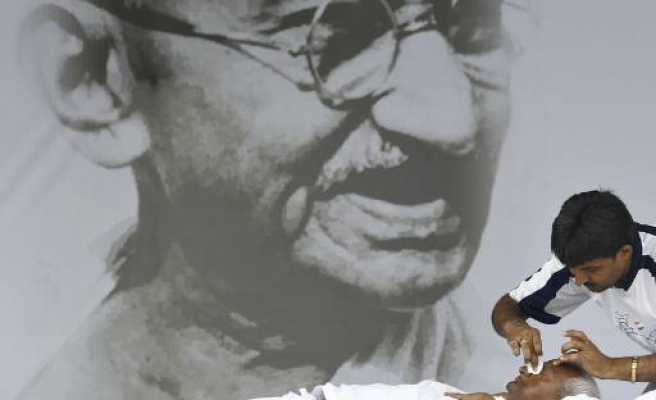 Indian anti-corruption crusader Anna Hazare on Wednesday ruled out any compromise in his stand-off with the government over graft legislation, vowing to press on with a hunger strike now in its ninth day, even if it costs him his life.

With Hazare's health failing and thousands of supporters packed into the muddy open ground in New Delhi where he is staging his public fast, time was running out for the government of Prime Minister Manmohan Singh to end the crisis.

Singh pleaded with the 74-year-old to at least agree to go on an intravenous drip, which Hazare has so far refused, and he called a meeting of political parties in parliament to find an end to the impasse.

Hazare's demand for more robust anti-graft laws has tapped into popular fury, particularly among the middle class, over the corruption that dogs Asia's third-largest economy, bringing tens of thousands onto streets across the country in the biggest social protests since the 1970s.

"I've only lost six kilos and a bit of my kidney is affected, but it is nothing to worry about," said the self-styled Gandhian activist, addressing his admirers in the Ramlila field just outside the walled city of old Delhi.

"Until the government agrees to all conditions, I will not back down. Even if I have to die."

The government has begun to offer concessions over tougher anti-corruption laws, but a deal has remained elusive.

"Over the last few days, I have watched with increasing concern the state of your health," Singh wrote in a letter to Hazare that was published by his office. "At worst, our paths and methodologies may differ, though I do believe that even those differences have been exaggerated."

Despite the throng of supporters at Ramlila, criticism of Hazare's unyielding stand has mounted steadily, with prominent social activists, intellectuals and politicians calling on him and his movement to come to a compromise.

Hazare's protests earlier this year prompted the government to introduce an anti-graft bill in parliament in August, but he and his supporters have slammed the draft law as toothless.

Hazare's movement wants the draft bill withdrawn and their own version -- which would create an autonomous anti-corruption agency -- to be passed by the end of this month, a demand senior government figures say is unrealistic.

Hazare's deteriorating health could force the government to decide on force-feeding him, a move that would risk sparking further protests against a fumbling government of elderly ministers widely seen as out of touch.

"Today is a very crucial day for the movement as his health is critical. Some concrete decision has to take place in the next few days or this movement may turn violent if something happens to him. We hope he breaks his fast in the next two days," said 26-year-old IT graduate Raj Aryan.

Hazare has rejected doctors' advice to go to hospital or take an intravenous drip.

"If anyone from the government comes to take me away forcibly, then block the gates. I will not go," Hazare told his supporters late on Tuesday. He has remained lying or sitting on a public stage in the open for most of the day. He sleeps for a few hours in a small cordoned-off area during the night.

With key state elections due next year in the run-up to a general election in 2014, Singh is under pressure to end a crisis that has paralysed policy making and parliament and added to his unpopularity amid high inflation and a run of corruption scandals.

Many of India's fast-growing urban middle class have joined forces with Hazare to protest against a system that requires bribes for everything from driver's licences to birth certificates and has allowed politicians and businessmen to cream off millions of dollars through shady deals.

Several scandals linked to the government, including a telecoms bribery scam that may have cost the government up to $39 billion, led to Hazare's latest protest.

The activist, who has carried out scores of hunger strikes over the last few decades to pressure governments, has since been visited by Hindu gurus, former judges and Bollywood actors. But he has refused to have any politicians on his stage.

As his fast entered its ninth day, the sentiment inside Ramlila ground remained jubilant. Thousands of people were again gathered in the grounds, large parts of which were waterlogged and muddy after overnight rain.

The main opposition, the Hindu nationalist Bharatiya Janata Party (BJP), is organising a nationwide protest against the government on Thursday as it seeks to gain influence over what has essentially been a protest driven by the urban middle class.

Hazare was briefly jailed last week, a move the government tried to reverse quietly. But he remained voluntarily in prison until the government allowed him to continue his vigil, in public, for 15 days, and finally emerged last Friday to huge cheers from a triumphant crowd.