Indonesia in election blackout ahead of Wednesday's vote

Presidential favorite Jokowi has a greater chance of winning despite rival Prabowo making gains in exit polls, an analyst said. 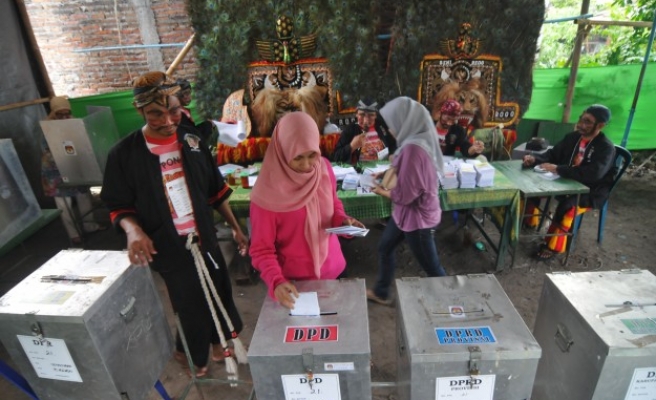 After almost a month of ferocious campaigning, Indonesian politics fell into a lull on Monday as the world's second biggest democracy slipped into a three-day electioneering blackout prior to Wednesday's presidential vote.

Over the weekend, overseas voters made their choices, the vice presidential choice for candidate Prabowo Subianto claiming the duo had won 60 percent of the vote based on an exit poll conducted by his supporters abroad. Rival candidate Joko "Jokowi" Widodo, however, also laid claim.

Triyono Lukmantoro, a political analyst at the University of Diponegoro in Semarang, Central Java, told the Anadolu Agency on Monday that he saw Jokowi as having the greater chance of winning despite Prabowo having made recent gains in exit polls.

Jokowi -- who resigned his post as mayor of Indonesia's capital city Jakarta to run for president -- is a one time little-known furniture retailer, whose stock began to rise in 2005 when he became the mayor of the central Javanese city of Solo, while Subianto -- reported to model himself on the founder of modern Turkey Mustafa Kemal Ataturk -- is a businessman and heavily decorated lieutenant general, having headed the country's oppressive special forces under General Suharto 16 years ago.

For months, polls put the 53-year-old everyman -- who resigned his role as Jakarta mayor to run in the election -- well ahead, but the latest survey by the Indonesian Survey Circle has him at just 47.8 percent with Subianto at 44.2 percent.

"Even though the exit polls stating the distance of two candidate is getting thin, I remain optimistic Jokowi will win," Lukmantoro told the AA by phone.

Jokowi has gained the support of popular parties, and in the five televised presidential debates so far, Lukmantoro said Jokowi is seen as having a concrete program, which is easy for all levels of society to grasp.

"Prabowo's [meanwhile] is abstract and conceptual. It's more understandable among intermediate voters and those above who live in urban areas."

In the final election debate Saturday, the two candidates sparred over vested interests and the corruption which has vastly impeded the country’s economic progress -- a 2013 Transparency International survey ranked Indonesia 114th among 177 countries in terms of corruption perceptions.

Both spoke of their efforts in fighting graft, with Jokowi's running mate Jusuf Kalla saying they had no "mafia" standing by their side and asked Subianto who he was referring to the comments he made about the risk of state-sanctioned corruption in the country.

Subianto, 62, said democracy was at risk of drowning in improper practices.

"I’m not saying there are no thieves in my party," replied Subianto. "The spirit of democracy is being destroyed by many things."

A large swathe of those who can vote among Indonesia's 250 million still appear undecided -- the latest poll putting such voters at a massive 8 percent.

Budi -- most Indonesians use one name -- told the AA on Monday that he "would choose a fair leader, who serves the community without discrimination, and does not discriminate on religion, ethnic background, or race."

He refused to acknowledge, however, who he would vote for.

Activist Enar Ratriany Assa told the AA that she will choose a presidential candidate who really cares for the interests of women.

"The government should bring in the right women to help with such issues as law enforcement, to protect against those perpetrating domestic violence, and to fulfill guarantees to protect Indonesian labor," she said.

She said she will vote for Subianto.

As Indonesia -- the world's most populous Muslim nation -- prepares to choose its next leader, the navy has other things on its mind. On Monday, it sent two warship units to patrol the sea surrounding the international tourist center of Bali in anticipation of anyone trying to disturb the election.

General Subianto, meanwhile, said he would spend the next two days praying, while Jokowi has said he will take his wife and his two sons to Mecca for Umrah.

Many Indonesian mufti have supported to president candidate Prabowo. Athian Ali, a mufti from West Java Province has announced the haram vote for Jokowi, because PDIP (the Jokowi's party) will forbade the syariah law in Indonesia. PDIP has khown as a party that far from moslem issue. But, Suddenly in this presidential ellection Jokowi and PDIP tell will care for moslem. Many moslem have not been dazzled by the Jokowi trict..Jokowi have been supported by USA,while Prabowo have Indonesia people