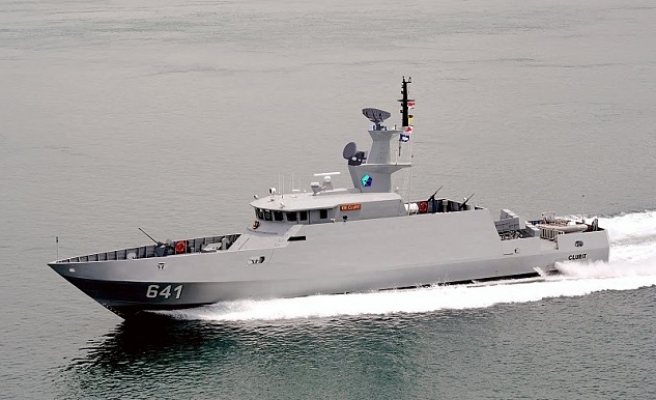 Indonesia lodged a protest Monday after Chinese coast guard vessels allegedly prevented its patrol boat from seizing a ship accused of fishing illegally in Indonesian waters near the Natuna Islands.

According to Indonesian authorities, a navy patrol boat had captured a Chinese ship for illegal fishing and detained its eight crewmembers Saturday -- only for an armed Chinese coast guard vessel to allegedly ram the seized ship so it could not be escorted to Natuna waters for investigation.

Later on Sunday, a better-equipped Chinese coast guard ship arrived and reportedly ordered the Indonesian boat to release the ship for it to be transported to Chinese waters in the disputed South China Sea, the Jakarta Post reported.

“We have expressed our strong protest and have submitted a memorandum during that meeting," national news agency Antara quoted her saying.

She stressed that all countries must respect international law, including the 1982 United Nations Convention on the Law of the Sea.

China claims almost all the resource-rich sea, and has overlapping claims with the Philippines, Vietnam, Malaysia, Taiwan and Brunei.

While the Natuna Islands are recognized as Indonesian territory, the country’s exclusive economic zone in the Nantuna Sea overlaps slightly with southernmost parts of the South China Sea.

In a statement to Indonesian media, the Chinese embassy said the fishing vessel had been operating in China’s “historical traditional fishing ground” when it was “chased by Indonesia's armed ship”.

Merdeka.com also quoted the statement as calling for the release of the ship’s eight crewmembers and for both countries addressing the matter through diplomatic channels.

On Sunday, Indonesia’s maritime affairs and fisheries minister expressed disappointment that China’s coast guard would “protect” citizens suspected of illegal fishing in the waters of Natuna.

"My guess is that they [China’s coast guard] do not want the ship to be caught because we will surely sink [the ship into the sea],” Kompas.com quoted Susi Pudjiastuti as saying Sunday. “The Chinese government does not want their fish boat sunk."

She underlined that as a neighboring country, China should respect and appreciate Indonesia’s efforts to combat illegal fishing.

"Since we have respect for them, then they should appreciate and respect our sovereignty. And [they] must prohibit [their] vessels from fishing in our region," Pudjiastuti added.

Under Indonesia’s policy against illegal fishing, around 120 ships -- many of them foreign -- have been sunk since 2014.

The ministry announced that larger vessels would be deployed to patrol the Natuna Islands, according to the Post.

This weekend’s incident comes almost three years after an earlier incident in which Indonesia accused a Chinese patrol ship of retrieving another Chinese vessel captured by an Indonesian patrol ship in the Natuna region.