Indoneseians take to streets to show anger at Tony Abbott after he tied country's donation of $1 billion in tsunami aid to Indonesia's plans to execute two Australian drug smugglers. 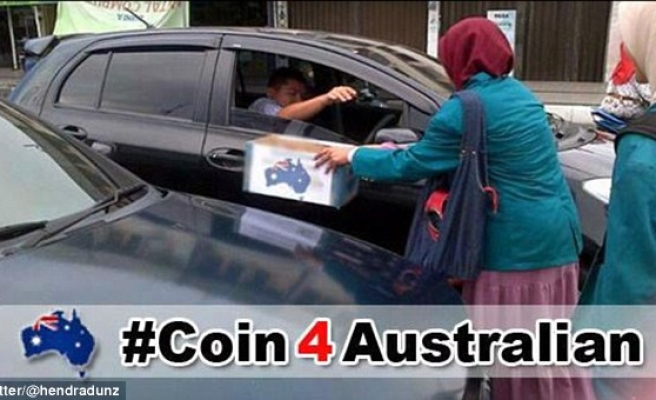 World Bulletin / News Desk
Enraged Indonesians have taken to the streets to show their distaste for Australian Prime Minister Tony Abbott after he tied his country's donation of $1 billion in tsunami aid to Indonesia's plans to execute two Australian drug smugglers.

Andrew Chan and Myuran Sukumaran are expected to be executed by firing squad sometime in the next few weeks. Abbot is the latest politician to jump on an ever-growing bandwagon asking for clemency for the two men.

"Let's not forget that a few years ago when Indonesia was struck by the Indian Ocean tsunami, Australia sent a billion dollars worth of assistance," Abbot told reporters Wednesday.

"I would say to the Indonesian people and the Indonesian government: we in Australia are always there to help you and we hope that you might reciprocate in this way at this time."

A spokesman for Indonesia's foreign ministry told reporters that he hadn’t studied Abbott’s comments, but understood he had made a linkage to “the issue now in Indonesia.”

“There’s a saying in Indonesia, ‘orang akan terlihat warna sebenarnya [people will show their true colours],” said Arrmanatha Nasir, according to The Jakarta Post. “So I hope this does not reflect, the statements made, the true colors of Australians.”

Since Abbot's comments, people have been rattling buckets at pedestrians and motorists asking for their spare change, while others have taken to twitter to voice their complaints using the hashtags #coinforAbbott, #KoinuntukAustralia and #coinforAustralia.

Some have also used social media to express faith in their country's judicial system, which has already executed 18 five foreigners and an Indonesian convicted of drugs offenses this year despite diplomatic pleas for a last minute reprieve.

On the streets of capital Jakarta, a group of people stood in front of an enormous sky blue banner picturing Abbot which read: "Australians need a prime minister, not a Shylock and drug dealer's cousin."

Shylock was a notorious moneylender in William Shakespeare’s "The Merchant of Venice" who demanded a pound of flesh when his rival defaulted on a loan.

Some protesters carried posters showing an image of the prime minister with his mouth taped up, above with a slogan read "We don't [need] no Australian education." Meanwhile, people littered the banner with coins.

Since Abbot -- who survived a leadership challenge earlier this month, although more than a third of his party's lawmakers voted against him -- spoke, his foreign affairs minister has called Indonesian Vice President Jusuf Kalla to clarify the comments.

President Joko Widodo said Friday that he was satisfied by Julie Bishop's explanation, saying that Indonesia had been preparing a formal rebuke.

In January, Widodo said he would refuse clemency for 64 drugs offenders facing execution, citing the harm caused to Indonesia by illegal narcotics.

Indonesia has said 20 executions are scheduled for this year.

The 2004 tsunami occurred Dec. 26 off the west coast of Sumatra, Indonesia.

According to the country's National Disaster Relief Coordination Agency, it killed 126,915 people and left 37,063 missing.

The United Nations has estimated 655,000 people were made homeless, sheltering in scattered refugee camps across the province.