Military radar-tracking evidence suggests a Malaysia Airlines jetliner missing for nearly a week was deliberately flown across the Malay peninsula towards the Andaman Islands, sources said 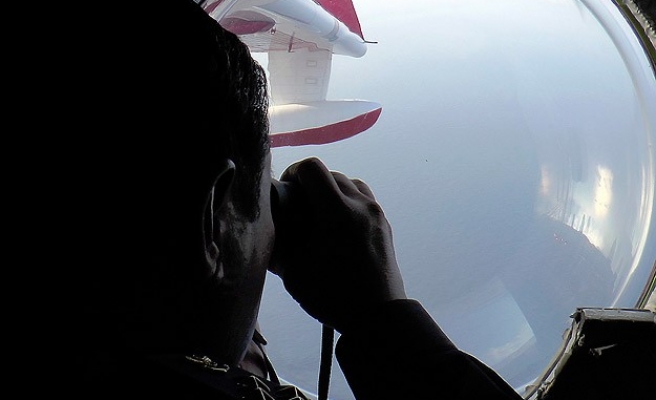 An investigation into the disappearance of a Malaysia Airlines jetliner is focusing more on a suspicion the flight was deliberately diverted, as evidence suggests it was last headed out over the Andaman Islands, sources familiar with the Malaysian probe said.

In a far more detailed description of military radar plotting than has been publicly revealed, two sources told Reuters that an unidentified aircraft that investigators suspect was missing Flight MH370 appeared to be following a commonly used navigational route when it was last spotted early on Saturday, northwest of Malaysia.

That course - headed into the Andaman Sea and towards the Bay of Bengal - could only have been set deliberately, either by flying the Boeing 777-200ER jet manually or by programming the auto-pilot.

A third investigative source said inquiries were focusing more on the theory that someone who knew how to fly a plane deliberately diverted the flight, with 239 people on board, hundreds of miles off its course from Kuala Lumpur to Beijing.

"What we can say is we are looking at sabotage, with hijack still on the cards," said the source, a senior Malaysian police official.

As one of the most baffling mysteries in the history of modern aviation remains unsolved after nearly a week, the latest radar evidence is consistent with the expansion of the search for the aircraft to the west of Malaysia, possibly as far as the Indian Ocean.

There has been no trace of the plane nor any sign of wreckage as the navies and military aircraft of more than a dozen countries scour the seas across Southeast Asia.

"It's my understanding that based on some new information that's not necessarily conclusive - but new information - an additional search area may be opened in the Indian Ocean," White House spokesman Jay Carney told reporters in Washington.

Carney did not specify the nature of the new information.

A statement from Malaysia's ministry of transport said it was following all leads that might help locate the aircraft.

Satellites picked up faint electronic pulses from the aircraft after it went missing on Saturday, but the signals gave no immediate information about where the jet was heading and little else about its fate, two sources close to the investigation said on Thursday.

U.S. experts are still examining the data to see if any information about its last location could be extracted, a source close to the investigation told Reuters.

The "pings" indicated its maintenance troubleshooting systems were switched on and ready to communicate with satellites, showing the aircraft was at least capable of communicating after losing touch with air traffic controllers.

The system transmits such pings about once an hour, according to the sources, who said five or six were heard. However, the pings alone are not proof that the plane was in the air or on the ground, they said.

The last sighting of the aircraft on civilian radar screens came shortly before 1:30 a.m. on Saturday, less than an hour after taking off. It was flying as scheduled across the mouth of the Gulf of Thailand on the eastern side of peninsular Malaysia, heading towards Beijing.

However, Malaysia's air force chief said on Wednesday that an aircraft that could have been the missing plane was plotted on military radar at 2:15 a.m., 200 miles (320 km) northwest of Penang Island off Malaysia's west coast.

This position marks the limit of Malaysia's military radar in that part of the country, a fourth source familiar with the investigation told Reuters.

Malaysia says it has asked neighbouring countries for their radar data, but has not confirmed receiving the information. Indonesian and Thai authorities said on Friday they had not received an official request for such data from Malaysia.

The fact that the plane - if it was MH370 - had lost contact with air traffic control and was invisible to civilian radar suggested someone on board had turned off its communication systems, the first two sources said.

They also gave new details on the direction in which the unidentified aircraft was heading - following aviation corridors identified on maps used by pilots as N571 and P628 - routes taken by commercial planes flying from Southeast Asia to the Middle East or Europe.

Despite the increased focus on the Indian Ocean, a senior Malaysia Airlines official expressed pessimism over the chances of finding the aircraft there.

"We are actually searching that part of the geography, but the likelihood of the aircraft being there is probably very, very low," Hugh Dunleavy, the airline's chief of operations, told Reuters in Beijing on Friday.

Malaysian police have said they were investigating whether any passengers or crew on the plane had personal or psychological problems that might shed light on the mystery, along with the possibility of a hijacking, sabotage or mechanical failure.

Ships and aircraft are now combing a vast area that had already been widened to cover both sides of the Malay Peninsula and the Andaman Sea.

An already difficult search task has been complicated in some areas by a choking haze caused by burning forest and farmland that has enveloped much of Malaysia and spilled into the Strait of Malacca. The haze, exacerbated by a prolonged dry spell, has reached hazardous levels in several spots.

"The haze will affect the search and rescue operations for sure. The visibility at the ground level has dropped to less than 3 km (1.9 miles)," Amirzudi Hashim, a senior meteorologist at the National Weather Center, told Reuters.

The U.S. Navy was sending an advanced P-8A Poseidon plane to help search the Strait of Malacca, a busy sealane separating the Malay Peninsula from the Indonesian island of Sumatra. It had already deployed a Navy P-3 Orion aircraft to those waters.

U.S. defence officials told Reuters that the U.S. Navy guided-missile destroyer, USS Kidd, was heading to the Strait of Malacca, answering a request from the Malaysian government. The Kidd had been searching the areas south of the Gulf of Thailand, along with the destroyer USS Pinckney.

India had deployed ships, planes and helicopters from the remote Andaman and Nicobar Islands, at the juncture of the Bay of Bengal and the Andaman Sea, an Indian military spokesman Harmeet Singh said on Friday.

Two Dornier aircraft were searching the land mass of the Andaman and Nicobar islands, a total area of 720 km by 52 km, Singh said.

China, which had more than 150 citizens on board the missing plane, has deployed four warships, four coastguard vessels, eight aircraft and trained 10 satellites on a wide search area. Chinese media have described the ship deployment as the largest Chinese rescue fleet ever assembled.

The Boeing 777 has one of the best safety records of any commercial aircraft in service. Its only previous fatal crash came on July 6 last year when Asiana Airlines Flight 214 struck a seawall with its undercarriage on landing in San Francisco. Three people died in the incident.