Ameneh Bahrami lost her sight in 2004 when Majid Mohavedi poured acid onto her face after she spurned his offers of marriage. 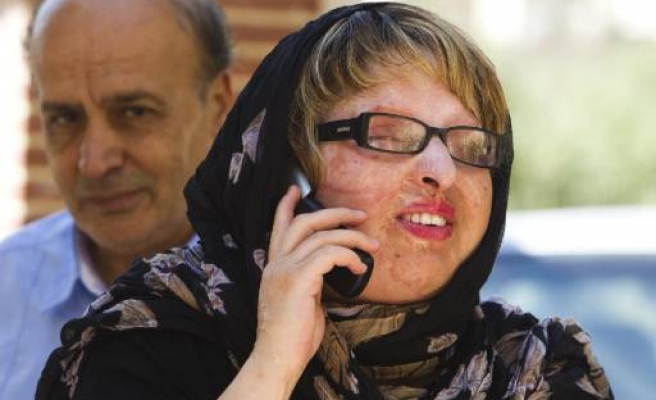 An Iranian woman blinded with acid by her suitor for turning down his marriage proposal spared him at the last minute from being blinded too as punishment for his crime, Iranian media reported on Sunday.

Ameneh Bahrami lost her sight in 2004 when Majid Mohavedi poured acid onto her face after she spurned his offers of marriage.

In 2008, a court sentenced Mohavedi to be blinded in both eyes for taking away Bahrami's sight, using the principle of retribution permitted under Iran's Islamic law.

"I have been trying for seven years to get the qisas (retribution) sentence, but today I decided to pardon him," Ameneh was quoted as saying by the ISNA news agency.

Ameneh said the international interest in the case was one reason for deciding to drop her demand for the sentence of retribution to be carried out.

"It seemed like the entire world was waiting to see what we did," she said.

The concept of "qisas" also applies to other crimes in Iran, such as murder. A victim's family can demand the death of a convicted murderer or commute the sentence in return for financial compensation from the criminal.

Tehran prosecutor general Abbas Jafari Dolatabadi praised Ameneh's move as a "courageous act" and said the judiciary had until then been determined to carry out the sentence.

"Everything was ready for carrying out the qisas on Majid's eyes, but Ameneh pardoned him on the brink of the execution of the sentence", Dolatabadi told ISNA.

"Ameneh is seeking (financial) compensation for other injuries inflicted on her," he added, without giving details.

A lawyer for Mohavedi had previously said his family would have great difficulty in finding the amount of money sought by Ameneh as their only asset was a house in Tehran.

Bahrami, whose face is still disfigured after undergoing several surgeries, said she had spared Majid from qisas but still seeks some 150,000 Euros in financial compensation.

"I will not forgo the compensation...which I need for my medical treatment," she said.

Mohavedi has completed seven years of a prison sentence and cannot be released unless compenstaion is paid.