Iran calls for stronger alliance, slams US at Afghan-Tajik summit

Iran's president called for a stronger alliance with other countries in the region straddling the Middle East and Central Asia. 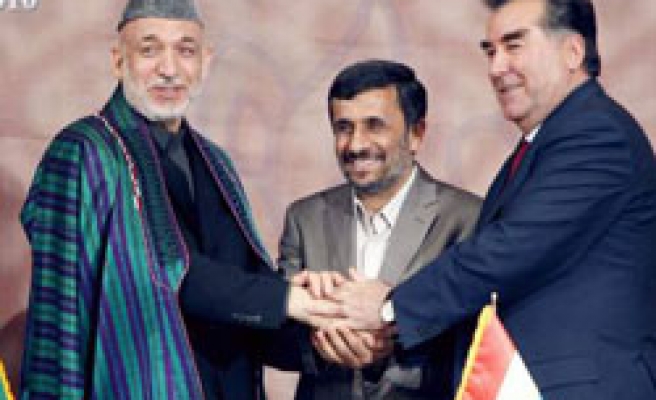 "Our security is linked. We suffer from what is happening in Afghanistan from an emotional and security point of view," Ahmadinejad said as the three leaders signed two cooperation accords in Tehran.

"The Afghan question must be resolved within the region, and experience has shown that others are unable to solve problems in the region, as they have been unable to do in Iraq," he said of the United States and its allies.

"Many do not welcome independence of our three countries. And they do not want a friendship between three powerful countries to be formed in the region because it will jeopardize their equilibrium," he added.

It was the fourth gathering between the tripartite group of Afghanistan, Iran and Tajikistan, which with a combined population of 110 million people share the Farsi language and Persian culture.

Iran's president called for a stronger alliance with other countries in the region straddling the Middle East and Central Asia.

"The Europeans and NATO are not interested in the progress of our three countries," Ahmadinejad said during the meeting, which was broadcast live on state television. "Those who put pressure from abroad are unwanted guests should leave, sooner or later."

The Iranian leader also urged cooperation between the three countries in the fields of transportation, energy and trade. His counterparts called for more aid from Iran.

The ayatollah called the three nations "cousins" and complained over role of the foreign forces in Afghanistan.

"Foreigners who came to Afghanistan under the slogan of providing security and democracy now target civilians, while their presence has not had any result except evilness and corruption," he said. "These powers are only after their own interests in the region."

In a final statement, the three countries stressed the rights of all nations to access peaceful nuclear energy, a reference to Iran's nuclear program.

They also agreed Kabul would host their next round of talks.