The worst damage and most casualties appeared to have been in rural villages around the towns of Ahar, Varzaghan and Harees, near the major city of Tabriz, Iranian media reported. 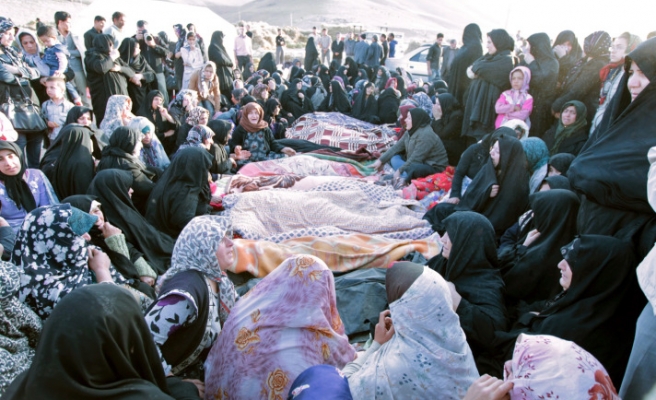 Thousands huddled in makeshift camps or slept in the street after Saturday's quakes in fear of more aftershocks, 60 of which had already struck. A lack of tents and other supplies left them exposed to the night chill, one witness told Reuters.

"I saw some people whose entire home was destroyed, and all their livestock killed," Tahir Sadati, a local photographer, said by telephone. "People need help, they need warm clothes, more tents, blankets and bread."

The worst damage and most casualties appeared to have been in rural villages around the towns of Ahar, Varzaghan and Harees, near the major city of Tabriz, Iranian media reported.

Tabriz resident Ahmad, 41, told Reuters his cousin living in a village near Ahar was killed and that his body had already been found.

"Nobody knows what happened to his wife and two daughters," aged 4 and 7, Ahmad said. "We fear that if rescuers don't get to them soon, they will lose their lives too if they're still alive."

But Iranian officials said rescue operations had ended by Sunday afternoon and that all those trapped beneath the rubble had been freed, Iran's English-language Press TV reported.

Many villages are hard to reach by road, hindering rescue efforts. Hospitals in Tabriz, Ardabil and other cities nearby took in many of the injured, residents and Iranian media said, and there were long queues of survivors waiting to be treated.

"I wanted to go there last night to help but heard there was bad traffic and that it wasn't safe enough," Ahmad said. "People in those villages need help."

Aidin, a Tabriz resident, said he went to give blood at a local hospital on Saturday and saw staff struggling to cope with the influx of patients. Most patients had been taken there by their families, he said, indicating a shortage of ambulances.

Ahar's 120-bed hospital was full, said Arash, a college student and resident of the town. There were traffic jams on the narrow road between Ahar and Tabriz as victims tried to reach hospitals, he said by telephone.

"People are scared and won't go back into their houses because they fear the buildings aren't safe."

More than 1,000 villages in the area were affected by the earthquakes, Ahmad Reza Shaji'i, a Red Crescent official, told the Iranian Students' News Agency (ISNA). About 130 villages suffered more than 70 percent damage, and 20 villages were completely destroyed, he said.

"We saw some villages that were truly destroyed," said Sadati, the photographer who was documenting the quake aftermath. "One good thing was that the earthquake happened during the day, so many people were not in their homes. If it had happened at night the casualties would have been far worse."

Nearly 100 ambulances and 1,100 Red Crescent workers were deployed, Shaji'i said, along with 44,000 food packages and 5,600 tents for shelter. The relief agency had enough supplies and most residents in the area had access to clean water but Shaji'i asked residents to donate cash to the relief effort.

Officials in Tehran extended condolences to the victims and declared two days of mourning to be held in the province, ISNA reported.

About 16,000 people in the quake-hit area have been given emergency shelter, Red Crescent official Mahmoud Mozafar told Mehr news agency.

Iranian lawmaker Mohammad Hassan-Nejad warned that if relief efforts did not speed up, the death toll would swiftly rise.

"Relief groups have still not reached many villages, because in normal conditions some of these villages are several hours away," he told ISNA. "Currently the roads are closed and the only way to reach these villages is by air."

Photographs posted on Iranian news websites showed numerous bodies, including children, lying on the floor of a white-tiled morgue in Ahar and medical staff treating the injured in the open air as dusk fell on Saturday. Other images showed rescue workers digging people out of rubble - some alive, many dead.

Iran is crisscrossed by major fault lines and has suffered several devastating earthquakes in recent years, including a 6.6 magnitude quake in 2003 that reduced the historic southeastern city of Bam to dust and killed about 31,000 people.

Saturday's quakes struck in East Azerbaijan province, a mountainous region that neighbours Azerbaijan and Armenia to the north. Buildings in Tabriz, the provincial capital, are substantially built and ISNA reported nobody in the city had been killed or hurt.

Homes and business premises in Iranian villages, however, are often made of concrete blocks or mud brick that can crumble and collapse in a strong quake.

Water, electricity, and phone lines in the area of Varzaghan are all down, further hindering rescue efforts, Iran's English-language Press TV reported.

Tabriz residents left their homes and crowded the streets following the two quakes, those in the city said. "Everyone was scared last night," a resident said by telephone. "They set up tents and were sleeping in the streets and in parks."