Iran's proposal for a 3-month ceasefire has been presented for discussion by NAM foreign ministers, Abdullahian said, and its outcome will be presented at the end of the summit on Friday. 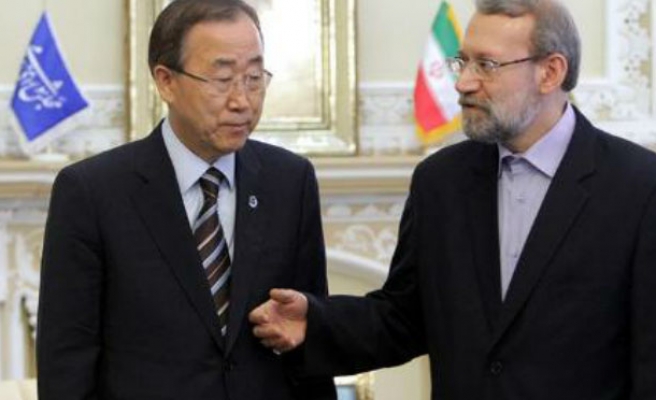 Iran will ask developing nations attending a summit there to back its call for a ceasefire in Syria, an official said on Wednesday, as Tehran seeks to be seen as a peacemaker in a region where its Arab neighbours often view it with suspicion.

Iran says the 120-nation Non-Aligned Movement (NAM) summit in its capital proves U.S. efforts to isolate it have failed. A resolution on Syria would help Tehran argue that its ties with Damascus are benign.

"Iran's proposal to the meeting of members of the Non-Aligned Movement to solve the Syria issue is to recommend a ceasefire and the implementation of national reconciliation talks in the country," deputy foreign minister Hossein Amir Abdullahian was quoted as saying by state news agency IRNA.

Tehran has backed Assad since an uprising began last year, describing the president as a key part of its "axis of resistance" against Israel and Western influence in the Middle East.

Iran supported a failed U.N.-Arab League peace plan and says it should be involved in future international efforts to end the bloodshed in Syria.

"Bashar al-Assad said that any step that comes from Iran in order to solve the problem in Syria is trustworthy and acceptable," said Alaeddin Boroujerdi, a senior parliamentarian visiting Syria this week.

"Any plan without Bashar al-Assad is destined to fail, just like up until now it has failed," Boroujerdi told Iran's Fars news agency, saying Assad had "defeated" the uprising.

Iran had an important role to play in regional issues, particularly regarding Syria, U.N. Secretary General Ban Ki-moon told Iranian journalists on his arrival in Tehran on Wednesday. He was due to meet both President Mahmoud Ahmadinejad and Supreme Leader Ayatollah Ali Khamenei later in the day.

Iran's proposal for a 3-month ceasefire has been presented for discussion by NAM foreign ministers, Abdullahian said, and its outcome will be presented at the end of the summit on Friday.

Egyptian president Mohammad Mursi - who is due to attend the summit as the first Egyptian leader in Iran since the 1979 Islamic revolution - is also expected to lay out further details of his own plan for Syria.

Last week, he spoke of forming a contact group comprising Egypt, Iran, Saudi Arabia and Turkey to resolve the crisis, an initiative the Iranian leadership is keen to pursue.

"When Mr. Mursi comes to Tehran we'll see whether there will be other initiatives by NAM. We'll have to cross our fingers and see how things move," foreign ministry official Mohammad Mehdi Akhoundzadeh told state television on Tuesday.