Soon afterward, a convoy of Swiss embassy cars entered Iran's Evin prison where Josh Fattal and Shane Bauer were being held, a Reuters journalist reported, signalling that their release was imminent. 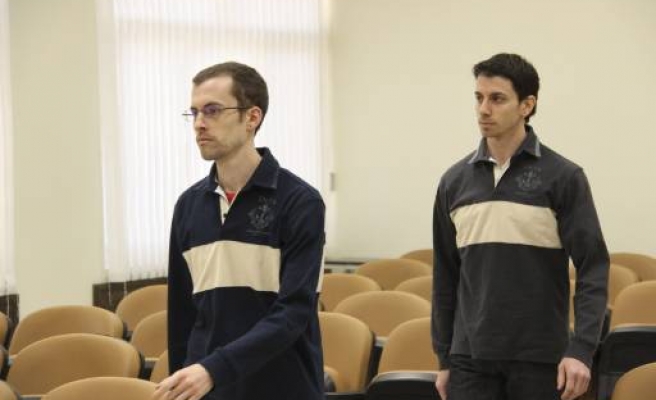 Iran is expected on Wednesday to free two American men convicted of espionage on bail and turn them over to the Swiss embassy in Tehran, their lawyer told Reuters.

Soon afterward, a convoy of Swiss embassy cars entered Iran's Evin prison where Josh Fattal and Shane Bauer were being held, a Reuters journalist reported, signalling that their release was imminent.

"I have got necessary signatures from judiciary officials for their release on bail ... Hopefully the two will be freed today," their lawyer Masoud Shafie said.

Bauer and Fattal were arrested in mid-2009 along Iran's border with Iraq where they claimed they were "hiking". They were found guilty of illegal entry and espionage and were sentenced last month to eight years in prison.

Iran's judiciary, which had said last week that their release was under review, has now confirmed that the pair will be freed on bail, Iranian state television reported.

"Until the final verdict is issued by the appeals court regarding the two American citizens' eight-year jail terms (each) ... they will be released on $500,000 bail each," it quoted the judiciary as saying.

The semi-official Fars news agency quoted the lawyer as saying that the two would be handed over at 1030 GMT to the Swiss embassy, which has represented U.S. interests in Iran since Washington cut off diplomatic relations with Tehran shortly after its 1979 Islamic Revolution.

Ahead of his annual trip to the United Nations, Iranian President Mahmoud Ahmadinejad told U.S. media last week that Bauer and Fattal would be freed "in a couple of days" as a humanitarian gesture.

Iraqi President Jalal Talabani helped to mediate the pending release of Fattal and Bauer, according to Iraqi officials.

The U.S. government denies that the three Americans were spies.