A video, which was released on YouTube on Saturday before being deleted, showed an image of a gaunt Goto in an orange t-shirt. In the apparent recording, Goto says Yukawa had been executed. But the journalist said the government of Japan could take action to save his life. 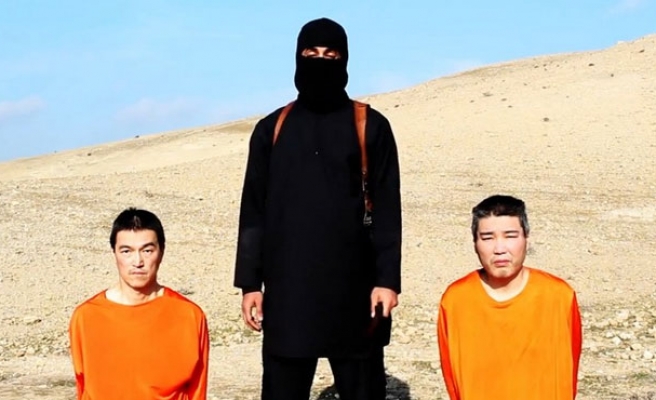 World Bulletin / News Desk
Japanese Prime Minister Shinzo Abe on Sunday called for the immediate release of a Japanese journalist held by ISIL after an audio recording claimed that a fellow Japanese captive had been executed.

Japanese government officials said they had not confirmed the authenticity of an image of what appeared to be Haruna Yukawa. Abe and other officials demanded the immediate release of the remaining Japanese captive, reporter Kenji Goto.

The Yomiuri Shimbun reported late Saturday that the video purports to feature an audio statement by hostage Kenji Goto and a photograph that appears to show fellow hostage Haruna Yukawa beheaded.

According to Japan's Kyodo news agency, Goto appears to say in English that his "cellmate" Yukawa has been killed.

He is also reported to tell the Japanese government that they must secure the release of a convicted al-Qaeda member -- Sagda al-Rishawi -- currently being held by the Jordanian authorities in order to save his life.

U.S. President Barack Obama condemned the brutal murder of Yukawa in a statement released by the White House, which did not address how the United States had confirmed his killing. Earlier, U.S. National Security Council deputy spokesman Patrick Ventrell had said the U.S. intelligence community was working to verify the authenticity of the recording.

The video appeared online at 11 p.m. (1400GMT) but was quickly taken down. Kyodo reported that the same video had also been emailed to the wife of one of the hostages.

SITE Intelligence -- which tracks militant propaganda -- reported that the video was posted on ISIL-linked Twitter accounts, but militants on a website affiliated with the group disagreed about its authenticity.

Yoshihide Suga -- the chief secretary in Japan's cabinet -- said that ministers would meet to discuss the situation while more information was gathered.

At a late night press conference, he called the action “unforgivable" and "strongly" urged that "Goto not be harmed and be immediately released.”

On Tuesday, Japan's government confirmed the existence of an initial video in which the group threatened to kill the two men within 72 hours unless a ransom of $200 million was paid.

Prime Minister Shinzo Abe was on a trip to the Middle East when the original video was broadcast.

During the trip, he had pledged $200 million in non-military aid to the region -- used as justification in the original video for the ransom demand.

The government’s chief spokesperson, however, has emphasized that the money was strictly for humanitarian purposes, such as helping fund refugee efforts for those fleeing the conflict in Syria.

Reports have said that journalist Goto, 47, had travelled to Syria to find and ask for the release of Haruna Yukawa, a security contractor reportedly captured in August, when he was taken by ISIL.

Sagda al-Rishawi, who hails from Iraq, was sentenced to death in Jordan in 2005 following a spate of bombings that targeted three hotels in Amman that left dozens dead or injured, including foreign nationals.

In December, Jordanian militant leader Mohamed al-Shalabi -- better known as Abu Sayyaf -- urged the ISIL to trade a recently-captured Jordanian pilot for her and another prisoner.