Islamist charities rushed to provide aid for Pakistanis hit by the worst flooding in memory as government criticised for its response to the disaster. 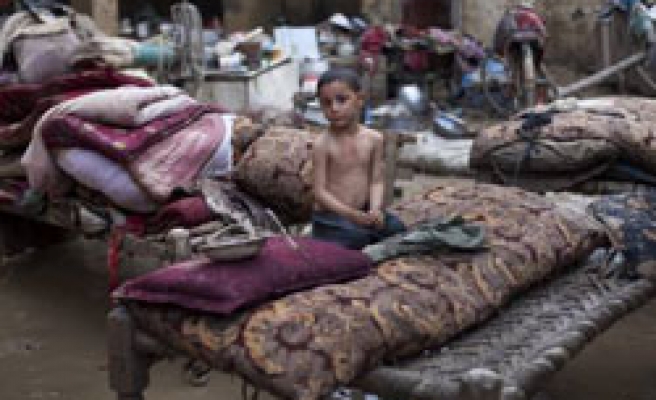 Islamist charities rushed on Monday to provide aid for Pakistanis hit by the worst flooding in memory as government criticised for its response to the disaster that has so far killed more than 1,000 people.

The floods that ravaged the northwest and displaced more than a million people are testing an administration heavily dependent on foreign aid as the government engages US-backed offensives.

Islamist charities gained huge respect as they did after a 2005 earthquake in Kashmir that killed some 75,000 people.

But in recent years, some international elements targeted these charities, and under US pressure, the government restricted the volunteer activities of some relief groups.

"We have lost everything. We only managed to save our lives. Nobody has come to us," said Mihrajuddin Khan, a school teacher in Swat Valley. "We are being treated like orphans, animals."

Rescuers are struggling to distribute relief to tens of thousands of people trapped in the submerged areas, where destroyed roads and bridges make access difficult.

Salman Shahid, spokesman for the Falah-i-Insaniat Foundation (Foundation for the Welfare of Humanity), said the Islamist group had set up 13 relief and six medical camps, and a dozen ambulances are providing emergency treatment. Several other Islamist groups are also helping out with the relief effort.

"We're very much there. We're the only group that is providing cooked food to trapped people and those laying on the roadside," Shahid told Reuters from the group's headquarters in Lahore. "Our volunteers are evacuating people."

Authorities are expecting the death toll to rise, as more of the heavy monsoon rains lashing the area for the past week are forecast. Pakistan's National Disaster Management Authority said more than 29,500 houses were damaged and a key trade highway to China was blocked by flooding.

"Our main challenge of getting a clearer picture is access," said Nicki Bennett, senior humanitarian officer at United Nations Office for the Coordination of Humanitarian Affairs.

Officials said it was too early to estimate the damage the floods had caused to the overall economy, but the rains have so far spared the main agricultural heartland in the Punjab.

"The entire infrastructure we built in the last 50 years has been destroyed," said Adnan Khan, spokesman for the provincial Disaster Management Authority in Khyber-Pakhtunkhwa.

The disaster management authority said tents and hygiene kits have been delivered. Helicopters and boats have been dispatched.

But analysts say the government really lacks the resources to take on a disaster of this scale, leaving the military in charge.

More than 30,000 Pakistani army troops have rescued some 19,000 people from marooned areas so far. Some army bases used to strike at local pro-Taliban fighters in US-backed offensives in Nowshera, some 100 kms (62 miles) northwest of the capital Islamabad, have been flooded. President Asif Ali Zardari's government's failure to help victims reinforced the long-held view that Pakistan's civilian authorities are ineffective, leaving the military to act at troubled times.

"When you have a democratically-elected government it is expected that the civilian government will mobilise all their resources and will come to the rescue of the people," said Riffat Hussein, chairman, department of defence and strategic studies, at Quaid-e-Azam University.

"What we have seen is their almost total paralysis and they have not been able to mobilise the resources."

Many in the path of the floods scrambled to save their livestock. One man swam across heavy currents with his chicken tied around his neck. In one town, there were more than a hundred bloated buffalo carcasses, raising the spectre of disease.

People complained there was no early warning of flash floods from the government. Some were suddenly waist-deep in water, forced to grab their children and belongings and evacuate.

Analysts said part of the problem is the government has no long-term strategy to deal with such catastrophes.

"They are so preoccupied with trying to put out fires all the time and looking at the day-to-day things. They don't have the vision and the capability for a longer and broader perspective," said Talat Masood, a former army general and defence analyst.

Under US pressure, Pakistani government has launched major offensives against local pro-Taliban fighters in the northwestern border regions opposing Afghanistan invasion over the past year.