Basuki Tjahaja Purnama, better known by his nickname "Ahok", has been acting governor of the Indonesian capital since Joko Widodo stepped aside last month to become president. 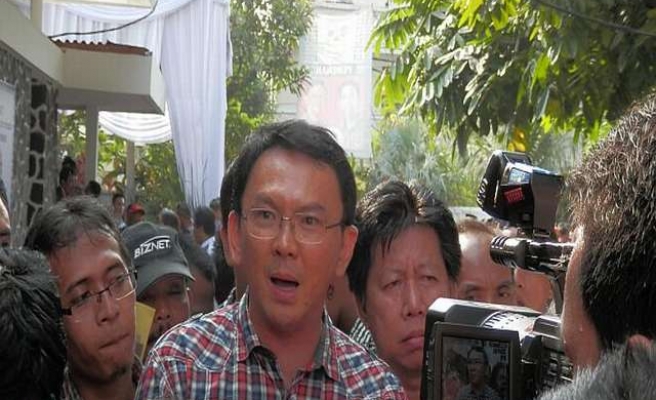 Jakarta's first Christian governor in nearly 50 years was sworn in on Wednesday in the face of protesters opposed to a non-Muslim taking over one of Indonesia's most powerful political jobs.

Basuki Tjahaja Purnama, better known by his nickname "Ahok", has been acting governor of the Indonesian capital since Joko Widodo stepped aside last month to become president.

Thousands of police were deployed around the capital this week in case of violence, but there was only a small group of peaceful protesters on Wednesday.

"I don't need to be approved by everyone," Ahok told reporters after being sworn in by the president. "The ones that deny me aren't Jakartans. They come from Bekasi, Depok, Bogor, which are not in my territory."

Ahok, who is the first ethnic Chinese governor of Jakarta, has a reputation for being a transparent, no-nonsense and at times abrasive leader. His style has been praised by residents long weary of a graft-ridden and inert bureaucracy.

Many Muslim organisations have also voiced support for Ahok.

Widodo's administration has pledged to protect all religious minorities in Indonesia, where nearly 90 percent of the population consider themselves Muslim.

But experts believe Widodo will be hamstrung by parliament, which is controlled by the opposition.

"I do not have high hopes for (Widodo's) administration ... because parliament is not controlled by his coalition," said Andreas Harsono, Indonesia director for Human Rights Watch.