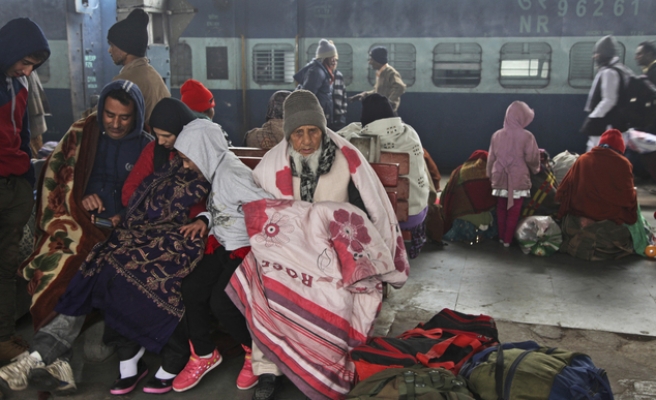 Heavy numbers of Indian security forces were on the streets across Jammu Kashmir on Friday, the 70th anniversary of India’s annexation of the region.

Neighborhoods in Srinagar were placed under curfew-like restrictions as protests were expected to mark “Black Day”.

The Joint Resistance Leadership called for demonstrations to be held after Friday prayers and shops, businesses and schools remained closed, with roads free of public buses and rail services suspended.

Indian soldiers entered the Muslim-majority region on Oct. 27, 1947, and the region has been a source of tension between India and Pakistan ever since.

In 1989, resistance groups launched a campaign for independence or unification with Pakistan, leading to more than 70,000 deaths. India maintains more than half a million troops in the region.

In Pakistan, President Mamnoon Hussain reiterated his country’s support, referring to the day as one of the “most tragic chapters of human history.”

He added: “I join the international community to express our complete solidarity with our Kashmiri brethren who continue to suffer today at the hands of a brutal occupation.

“We will continue to extend to them our unflinching moral, political and diplomatic support in their just struggle for the right to self-determination.

“Our support will continue until the realization of the cherished dream for freedom of millions of Kashmiris from draconian Indian occupation.”

Pakistani Prime Minister Shahid Khaqan Abbasi said: “We pay homage to the sacrifices of our brethren… and reiterate our unflinching and steadfast moral, diplomatic and political support for the just cause of the people of Jammu Kashmir.

“This support will continue until the realisation of the lawful right to self-determination of the people of Jammu Kashmir.”

India and Pakistan control parts of Kashmir but both claim the whole region as their territory. Part is also held by China.

Since partition in 1947, India and Pakistan have fought three wars -- in 1948, 1965 and 1971 -- two of which were waged over Kashmir. They fought intermittently on the Siachen glacier in northern Kashmir from 1984 until a cease-fire came into effect in 2003.