Japan wants explicit guarantees from India, which has not signed the nuclear non-proliferation treaty, to limit atomic tests and allow closer inspection of its facilities 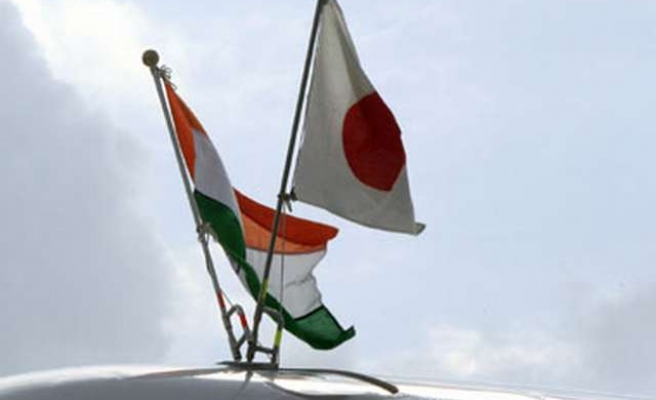 Japan and India agreed on Monday to strengthen defence ties as Asia's second and third biggest economies keep a wary eye on a rising China, with India's Prime Minister Narendra Modi lashing out at the "expansionism" of some nations.

Japanese Prime Minister Shinzo Abe and his Indian counterpart Narendra Modi also agreed to speed up talks on a so-far elusive deal on nuclear energy cooperation, welcoming what they called "significant progress" in the negotiations.

"From this day on, Prime Minister Modi and I will work hand-in-hand to dramatically strengthen relations in every field and elevate ties to a special, strategic global partnership," Abe told a joint media event after a summit with Modi.

They also agreed to accelerate talks on the possible sale of an amphibious aircraft to India's navy - likely to become Japan's first overseas military sale in nearly 50 years and a result of Abe's more muscular approach to defence in the face of an assertive China.

Modi, on his first major foreign visit since a landslide election win in May, arrived on Saturday for a five-day trip aimed at capitalising on his personal affinity with Abe to bolster security and business ties.

"We intend to give a new thrust and direction to our defence cooperation, including collaboration in defence technology and equipment, given our shared interest in peace and stability and maritime security," Modi said.

In a sign of their warmth, the two leaders greeted each other with a bear hug when they met on Saturday in Japan's ancient capital of Kyoto for an informal dinner. Modi is one of three people that Abe follows on Twitter, while the Indian leader admires Abe's brand of nationalist politics.

"The 21st century belongs to Asia ... but how the 21st century will be depends on how strong and progressive India-Japan ties are," Modi told Japanese and Indian business executives earlier in the day.

Modi criticised the 18th-century expansionist ways of some countries that encroach upon the seas and territories of others, in a veiled reference to China, with which India shares a long disputed border.

Sino-Japanese ties have also been chilled by a row over disputed isles, feuds over the wartime past, and mutual mistrust over defence policies as China seeks a bigger regional role and Abe loosens the constraints of Japan's post-war pacificism.

Abe is keen to expand Japan's network of security partnerships with countries such as India and Australia to cope with the challenge presented by China.

Modi, for his part, is embarking on an intense month of diplomacy in which he will receive Chinese President Xi Jinping before meeting U.S. President Barack Obama in Washington as he seeks to carve out a stronger role for India as a global player.

Abe and Modi agreed to look into upgrading a 'two-plus-two' format for security talks by bringing together their foreign and defence ministers, and directed officials to launch working level talks on defence equipment and technology cooperation.

They also agreed to hold regular maritime exercises, and that Japan would continue to participate in U.S.-India drills.

The two leaders set a target to double Japan's direct investment in India within five years. Abe said Japan would aim to invest 3.5 trillion yen ($33.6 billion) in public and private investment and financing including foreign aid to India in five years for projects such as infrastructure and clean energy.

Modi is aiming to spur faster economic growth through infrastructure development and manufacturing to create work for the one million young people who enter the workforce every month.

In early steps, he has allowed foreign investors to own 100 percent of railway projects with an eye to drumming up interest in building India's answer to Japan's high-speed 'bullet' trains. He is also courting Japanese investment in an ambitious industrial "corridor" to run between Delhi and Mumbai.

Hopes of striking a nuclear energy deal at the summit similar to an accord reached with the United States in 2008 had faded in the run-up to Modi's visit. Still, the leaders said there had been "significant progress" in negotiations.

Japan wants explicit guarantees from India, which has not signed the nuclear non-proliferation treaty, to limit atomic tests and allow closer inspection of its facilities to ensure that spent fuel is not used to make bombs.

The two leaders also welcomed a substantial agreement on a commercial deal on the manufacture and supply of rare earth chlorides, a key element of defence industry components and hi-tech wares, by India to Japan.