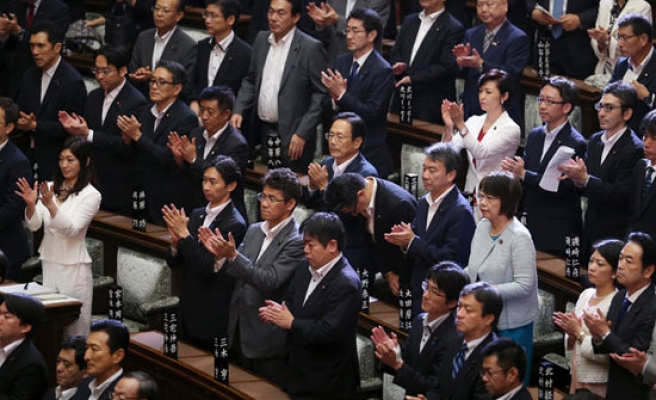 The upper house of Japan’s bicameral legislature has passed security bills that will see the country expand the scope of operations by its troops overseas after the opposition exhausted all its delaying tactics.

The House of Councillors vote came at around 2 a.m. Saturday (1700GMT Friday), enacting the bills into law after the House of Representatives passed them in July.

The opposition, led by the Democratic Party of Japan (DPJ) and four others parties including the Communists, applied every parliamentary delaying tactic they could think of to postpone the final tally.

Mostly, they submitted censure or no confidence motions, one after another, eating up time as each motion was debated and voted on.  Some opposition members were dressed in mourning black to underscore their belief that the laws will drag Japan into foreign wars.

“The government has failed to win the understanding of the people, and a majority of the nation is opposed to then,” DPJ Secretary General Yukio Edano said during the floor debate.

They however seemed eager to avoid another mob scene such as marred the debate on the bills in a special committee hearing Thursday, when opposition members mobbed the committee chairman, Yoshitada Konoike, to try to prevent a vote.

The administration of Prime Minister Shinzo Abe was eager to gain passage of the bills before the start of a five-day holiday in Japan, giving opponents the free time to mount more public demonstrations. Also the parliamentary session ends Sept. 27.

Passage was inevitable, so long as the Liberal Democratic Party and its Komeito ally held together, since the two parties control both houses of parliament with strong majorities.

The two new laws are designed to put into effect the cabinet’s decision in 2012 to interpret Japan’s pacifistic constitution in a way to permit “collective defense,” meaning the ability to support allies near Japan or partners in foreign peace-keeping operations.