Japan said on Monday it would ask China to pay for damage to its patrol boats sustained when a Chinese trawler collided with them near disputed islets. 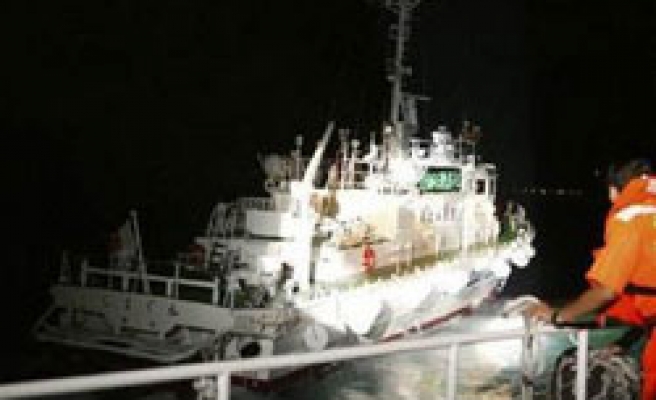 Japan said on Monday it would ask China to pay for damage to its patrol boats sustained when a Chinese trawler collided with them near disputed islets, as Asia's top two economies continued to bicker over the affair.

Chinese official newspapers accused Japan of exploiting the sea dispute to bolster its alliance with the United States, and warned that Tokyo could not afford the economic price of confrontation with Beijing.

Verbal volleying has continued for days in a quarrel between the two neighbours over Japan's detention of the Chinese skipper of the fishing boat that collided with two Japanese coastguard ships, although he was released and returned home on the weekend.

Japan, which has rejected China's demand for an apology and compensation for his detention, said it would instead ask Beijing to cover the damage from the incident on Sept. 7 near the islets, known as the Diaoyu in China and Senkaku in Japan.

"Naturally, we will be asking for the boats to be returned to their original condition," Chief Cabinet Secretary Yoshito Sengoku told a news conference. "Regardless of us doing it now or later when things have cooled down, this will be the government's task."

The dispute has raised concerns about damage to Sino-Japanese trade ties at a time when Japan is becoming increasingly reliant on China's dynamism for growth.

Comments in Chinese state media underscored the degree of distrust of Japanese intentions in Beijing, and the conviction that the dispute over a single boat captain carried much broader geopolitical implications.

The People's Daily, the key mouthpiece of China's ruling Communist Party, said political forces in Japan "exploited intensified contention between China and Japan to play up the 'China threat'" and to build on a deepening of Tokyo's alliance with the United States.

Japan had underestimated China's resolve and misjudged where its own interests lie, said a commentary in the newspaper. Up until now, China's main official newspaper has not given extensive editorial comment on the dispute.

"On issues bearing on sovereignty and territorial unity and integrity, China's stance is unyielding and there can be no concessions or compromise," said the commentary.

The United States had to balance its alliance with Japan with the need to win cooperation with China, said the newspaper.

"At the crucial moment, Japan lacked full confidence that the United States could be relied on," it said.

The overseas edition of the People's Daily carried an even stronger message that China would not dilute its claims to the disputed islands and saw little to fear from U.S. pressure.

"It would really be excessively naive ... to rely on other great powers as back-up to force China to submit," said the newspaper, which is a smaller offshoot of the main domestic edition of the paper.

Japan has called for calm, although the government is under fire from its own domestic media for "caving in" to Chinese pressure by releasing the captain after China detained four Japanese citizens. Japan has denied a link.

Japanese officials have also been concerned about the economic fallout from the spat.

Some Chinese customs offices have started stricter checks on shipments to and from Japan, causing delays, in what may be retaliation against Japan's recent detention of a Chinese fishing boat captain, the Mainichi newspaper in Japan said on Monday.

The latest development comes when there is concern that Beijing is holding back shipments of rare earth minerals vital for electronics and auto parts, although China has denied that there is a ban on exports to Japan.