Prime minister's speech may have been catalyst to hostage crisis, media suggests 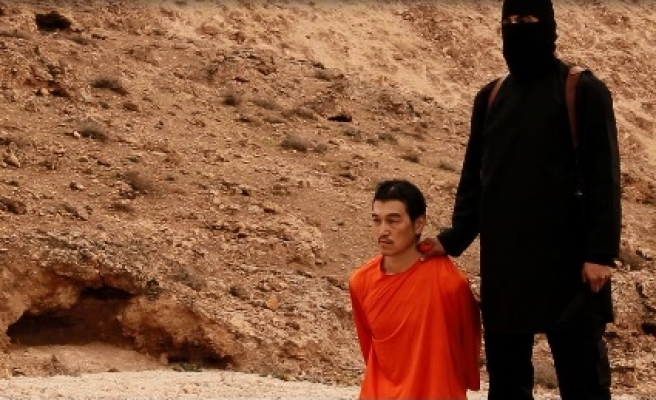 Japan awoke Sunday morning to the possibility that hostage Kenji Goto was killed by the Islamic State of Iraq and the Levant due to a mistranslation, local media reported.

Goto was captured by the group, known as ISIL, in late October and had been held with fellow Japanese Haruna Yukawa, who was killed last week.

Japanese media focused on Prime Minister Shinzo Abe’s Jan. 17 statement in Cairo, in which he pledged $200 million worth of humanitarian aid to countries confronting ISIL, as a catalyst for the executions.

The Nikkan Gendai newspaper raised the possibility that the hostage situation arose through a miscommunication around Abe’s Cairo announcement. It said that the English version of the Japanese text was mistranslated and no Arabic language text was provided.

In a key part of his speech, Abe said: “I will pledge assistance of a total of about $200 million for those countries contending with ISIL to help build their human capacities, infrastructure and so on.”

The newspaper said that ISIL may have interpreted this as Japan providing military aid. An initial hostage video released on Jan. 20 featuring Goto and Yukawa showed the two men kneeling in front of a black-clad militant who demanded a $200 million ransom.

Addressing Abe, the terrorist said: “You have proudly donated $100 million to kill our women and children, to destroy the homes of the Muslims.”

The Japanese government rushed to stress that the money was non-military in nature. It also provided an Arabic translation of Abe’s Cairo speech.

ISIL later dropped its ransom demand and instead insisted on the release of Sajida al-Rishawi, an Iraqi woman awaiting execution in Jordan for terror offenses.

In the last few days, most negotiation was handled by the Jordanian government, which seemed to be focused on freeing its own ISIL captive, air force pilot Muath al-Kaseasbah.

During the standoff, the Japanese government was unable to establish direct contact with the militants holding the two hostages, so was never able to explain its position fully.

Separately, it was reported that Goto returned to Syria in October believing he was relatively safe because Japan was not at war with ISIL. He had gone to help secure the release of Yukawa, 42, who was captured in August.

In Saturday night’s video, the black-clad executioner, seemingly the same British-accented man who appeared in previous videos, taunted Japan in a one-minute broadcast.

“Abe, because of your decision to take part in an unwinnable war, this knife will not only slaughter Kenji but will carry on and also cause carnage wherever your people are found,” he said. “Let the nightmare for Japan begin.”

The man then put his knife to Goto’s throat and the video switched to a still image of what appeared to be the journalist’s beheaded body.

Speaking to journalists after the release of the video, Abe said: “Japan will not give in to terrorism and will continue to provide humanitarian aid to the Middle East… I will never forgive these terrorists.”

Goto’s mother Junko Ishido said: “I am too upset to find the words to express myself. My son’s last act was to go to Syria to help a fellow Japanese. So I want people to understand my son’s kindness and courage.”

His older brother Junichi Goto added: “I had hoped to give thanks for his return alive. But, as his brother, this outcome is very regrettable.”

ISIL has killed hundreds of captives, mainly Syrian and Iraqi soldiers, during its sweep across the two countries and has celebrated its mass killings in graphic videos.