Internal Affairs minister Yoshitaka Shindo, along with a close aide to Abe, paid their respects at Yasukuni, where 14 war criminals convicted by an Allied tribunal are honoured along with the nation's war dead 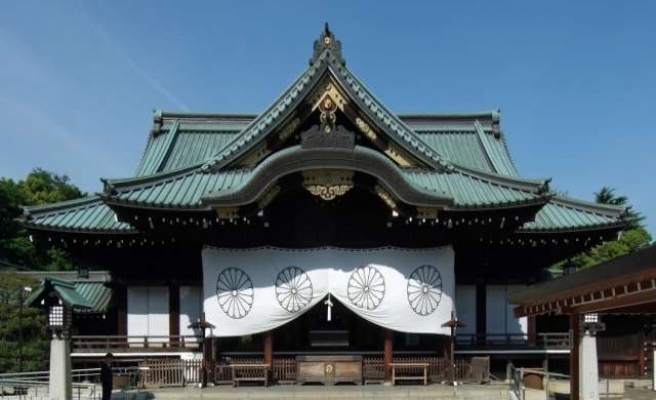 A Japanese cabinet minister and about 150 lawmakers on Tuesday visited Yasukuni Shrine, seen by critics as a symbol of Japan's past militarism, sparking anger among Asian neighbours a day before U.S. President Barack Obama arrives in the region.

The visit followed an offering to the shrine by Prime Minister Shinzo Abe on Monday that further strained already fraught regional ties, with both China and South Korea questioning Japan's commitment to dialogue.

Japan's relations with China and South Korea have long been strained by territorial rows and disputes stemming from Japan's wartime occupation of large parts of China and its 1910-1945 colonization of the Korean peninsula.

Compounding China's suspicion of Japan is the belief that the hawkish Abe, who has often spoken of "escaping the post-war regime", is intent on revising Japan's pacifist constitution adopted after its World War Two defeat.

Japan's Internal Affairs Minister Yoshitaka Shindo, along with a close aide to Abe, paid their respects at Yasukuni, where 14 war criminals convicted by an Allied tribunal are honoured along with the nation's war dead, as part of the shrine's annual spring festival that ends on Wednesday, the day Obama arrives.

"As this visit was my personal visit, I don't believe that it will have any effect on the U.S. president's visit," Shindo told reporters. A separate visit Shindo made to Yasukuni this month prompted an angry response from China.

Abe made a December visit to the shrine which sparked widespread global anger, with main ally the United States saying it was "disappointed". But this time Abe opted for an offering, and not a visit, aimed at pleasing his conservative supporters while trying to minimise international criticism.

"Although having decided not to pay tribute to the shrine in person this time, Abe dedicated (an offering) on Monday in an obvious attempt to play both ways - avoid further embarrassing Obama diplomatically, and at the same time appease right-leaning forces domestically," Xinhua said.

Japan's Chief Cabinet Secretary Yoshihide Suga told a news conference that the government could not interfere with visits by lawmakers as private individuals, since that would infringe on their freedom of belief.

"This is the fundamental thinking of the Abe government," Suga said.

Chinese officials have in the past compared Japanese politicians' visits to the shrine to the idea of German politicians laying flowers on Hitler's bunker.

Obama in March brought together Abe and South Korean President Park Geun-hye for their first face-to-face talks to help the two major U.S. allies in Asia mend ties, and there had been tentative signs of a thaw.

But a spokesman for South Korea's Foreign Affairs Ministry told reporters on Tuesday that Japan was "romanticising" its past military aggression.

"We think it is meaningless for them to talk about the future to neighbouring nations when they are paying tribute to such a place," the ministry spokesman told reporters.

Adding to unease in the region, a Chinese maritime court in Shanghai at the weekend seized a ship owned by Japanese shipping firm Mitsui O.S.K. Lines, a move that Japan warned could have an adverse impact on its businesses in China.

The court said the company had failed to pay compensation stemming from a wartime contractual obligation. China's Foreign Ministry said the disagreement was a normal commercial dispute.

Japan said the ship seizure, apparently the first time the assets of a Japanese company have been seized in a lawsuit concerning compensation for World War Two, was "extremely regrettable" and it had protested through diplomatic channels.