Japan's whaling fleet has returned with more than 300 whales harvested from the Antarctic. 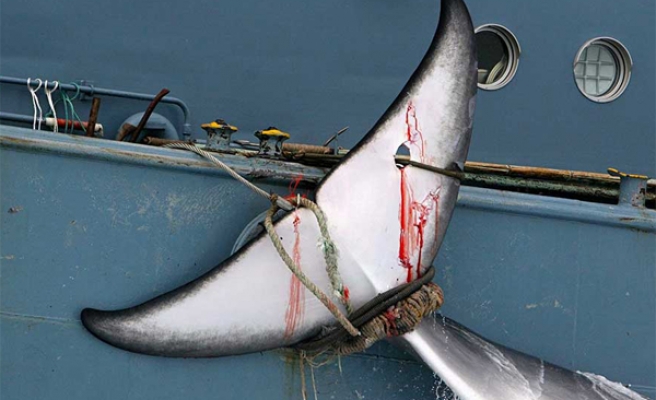 Japan’s flotilla of four whaling ships has returned home with its quota of 333 dead minke whales after spending four months in waters near Antarctica.

The numbers, considerably reduced from the 855 whales caught in the previous expedition, was deemed sufficient to maintain Tokyo’s position that the catch was for scientific purposes.

Of the 230 females in the catch, about 90 percent were estimated to be pregnant -- a figure the Fisheries Agency considers good news seemingly confirming that the breeding situation among minke whales is healthy.

Tokyo, which heavily subsidizes the annual hunt, maintains that it is trying to prove that the whale population is large and healthy enough to justify a return to unfettered commercial whaling.

Under a 1986 United Nations resolution, commercial whaling is banned, although there is an exemption for “scientific” whaling, which Japan has claimed since the commercial ban went into effect.

A few seafaring nations, such as Norway and Iceland, ignore the ban and make no pretense that their whaling activities are scientific.

In 2014, the UN International Court of Justice ruled that Japan’s whaling was not truly for science -- effectively blocking the 2013-2014 whaling season.

Tokyo responded with a new plan for a reduced catch, which it claims meets the criteria.

Most of the 2015-2016 catch will probably end up in school lunches, which opponents say makes it commercial whaling in reality.

Japan does not deny that whale meat ends up on some dining tables, but simply says it has to dispose of the whale somehow.

Although whaling has a long history in Japan -- making it a part of its culture, say proponents -- the number of Japanese who actually eat whale meet has declined dramatically in recent years.

Both Australia and New Zealand, along with environmental groups such as Greenpeace, strongly oppose Japan’s scientific whaling, but few confrontations at sea were evident during this whaling season.