Japan on Monday freed the crew of a Chinese fishing boat held last week in disputed waters, leaving unclear what will become of the arrested captain. 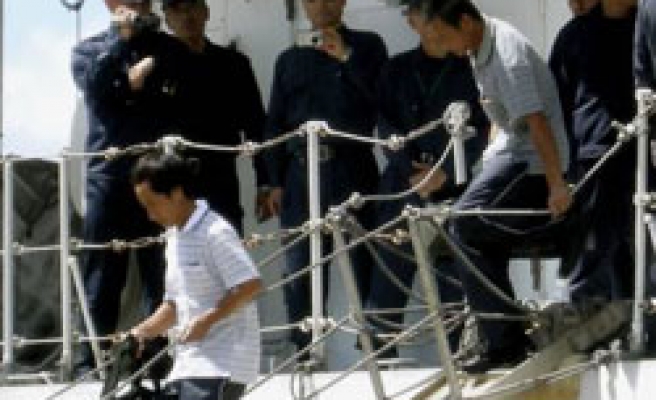 Japan on Monday freed the crew of a Chinese fishing boat held last week in disputed waters, leaving unclear what will become of the arrested captain at the centre of a territorial rift between the two neighbours.

"The 14 illegally held Chinese boat crew members were released by Japanese coast guard authorities," China's official Xinhua news agency said in a brief report which did not mention the arrested captain, Zhan Qixiong, as among those released.

The 14 crew are on their way home by plane, Xinhua added, having been kept aboard their boat in a harbour on the southern Japanese island of Ishigaki.

A spokesman at the local prosecutors' office said Zhan was still being held after a court approved to extend his detention on Friday. Prosecutors can hold him for a maximum of 20 days before making a decision on whether to proceed with legal action.

The row over the detained fishing boat has given an emotive focus to a long-running dispute between Beijing and Tokyo over who owns a group of islets in the East China Sea, called Diaoyu in China and Senkaku in Japan.

The islets are thought to lie near potential oil and gas reserves with vastly varying estimates. A Japanese survey estimated the entire East China Sea may hold 7 trillion cubic feet of gas, while Chinese estimates range from 175 trillion to 210 trillion cubic feet.

If China's estimates prove accurate, the additional reserves in the seas would make it one of the world's top 10 holders of natural gas and take it above the reserves held by top gas producer the United States, according to BP's 2010 statistical review.

China had summoned Japan's ambassador four times to protest the fishing boat detentions, and warned Tokyo on Sunday against making "misjudgements" in a case which has set back efforts to ease decades of distrust.

Liu Jiangyong, an expert on China-Japan relations at Tsinghua University in Beijing, said Japan appeared too preoccupied with a leadership election for the ruling party to decide on how to settle the issue.

"I don't see it having a major impact on trade and economic relations. But if Japan drags this out for long after the outcome of the Democratic Party election, the repercussions could be more serious," Liu said.

China last week called off planned talks with Japan over an undersea gas bed dispute in another part of the East China Sea after the seizure of the fishing boat and warned that worse repercussions may follow.

But Japan said on Monday it would ask China to hold talks on jointly developing gas fields in the East China Sea.

"Discussions are being held based on an agreement by leaders. Seeing this as important and dealing with this calmly, we will ask China to hold talks soon to build future-oriented relations," Chief Cabinet Secretary Yoshito Sengoku told a news conference.

Relations between Beijing and Tokyo have long been dogged by mutual distrust and Chinese bitterness over Japan's occupation of much of China before and during World War Two.

Since big public protests in China against Japan and bitter diplomatic exchanges in 2005 and 2006, both sides have sought to improve ties.

Yet they have stubborn disagreements over their sea rights, especially over the East China Sea islets, which China insists have been Chinese territory since ancient times.