The annual ceremony came as radioactive water leaks at the crippled Fukushima nuclear plant have stoked renewed fears about the plant's precarious state. 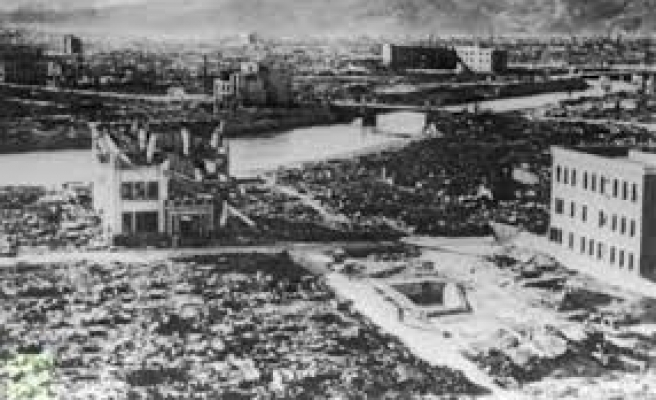 Tens of thousands gathered at a peace memorial park in Hiroshima on Tuesday to mark the 68th anniversary of the US atomic bombing of the city, as anti-atomic sentiment runs high in Japan.

In Hiroshima, ageing survivors, relatives, government officials and foreign delegates observed a moment of silence at 8:15 am (2315 GMT Monday), the time of the detonation which turned the western Japanese city into a nuclear inferno.

"We offer heartfelt consolation to the souls of the atomic bomb victims by pledging to do everything in our power to eliminate the absolute evil of nuclear weapons and achieve a peaceful world," Hiroshima Mayor Kazumi Matsui told the ceremony.

An American B-29 bomber named Enola Gay dropped an atomic bomb on Hiroshima August 6, 1945, in one of the final chapters of World War II. It killed an estimated 140,000 by December that year. Three days later, the port city of Nagasaki was also bombed, killing an estimated 70,000 people.

The Allied powers have long argued that the twin attacks brought a quick end to the war by speeding up Japan's surrender, preventing millions more casualties from a land invasion planned for later in the year.

Tokyo said the timing of an annual peace ceremony and the helicopter carrier unveiling was coincidental.

Among the attendees in Hiroshima last year was Clifton Truman Daniel, grandson of former US president Harry Truman, who authorised the bombings. He was the first Truman relative to attend the annual anniversary in Japan.

Many atomic bomb survivors, known as "hibakusha", oppose both military and civil use of nuclear power, pointing to the tens of thousands who were killed instantly in the Hiroshima blast and the many more who later died from radiation sickness and cancers linked to the attack.

Anti-nuclear sentiment flared in Japan after an earthquake-sparked tsunami left some 19,000 dead or missing and knocked out cooling systems at the Fukushima Daiichi nuclear plant two years ago.

Meltdowns at the crippled site spread radiation over a large area and forced thousands to leave their homes in the worst atomic disaster in a generation.

Concerns about Fukushima have remained high since the accident. In recent weeks, the plant's operator Tokyo Electric Power admitted for the first time that radioactive water had leaked into the ocean as it struggles to contain the toxic buildup.

"Eastern Japan is still suffering the aftermath of the great earthquake and the nuclear accident," Hiroshima's mayor said Tuesday.

"The people of Hiroshima know well the ordeal of recovery. We urge the national government to rapidly develop and implement a responsible energy policy that places top priority on peoples' safety and livelihood."

The administration of Japanese Prime Minister Shinzo Abe, who was among the attendees at Tuesday's memorial event, has advocated restarting Japan's switched-off nuclear reactors if their safety can be assured, a plan opposed by many in the disaster-struck nation.

Abe's conservative Liberal Democratic Party has also said it wants to upgrade Japan's self-defence forces into a full-fledged military, which would mean overhauling a pacifist constitution imposed on the country by the US and its allies after WWII.

Later Tuesday, the forces' naval arm was due to hold a ceremony marking the launch of a 248-metre (810-foot) helicopter carrier which can accommodate nine aircraft.

Officials said the ceremony was scheduled for the same day as the Hiroshima anniversary due to favourable ocean tides and an auspicious date.