Japan PM race begins with no winner in sight

The race to select Japan's sixth leader in five years is shaping up as a battle between allies. 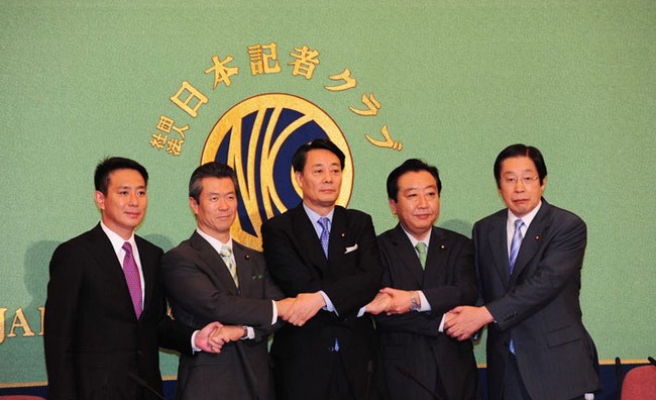 Japan's ruling Democratic Party formally kicked off a leadership race to pick the next prime minister on Saturday, with no clear winner among five candidates in sight, as the country confronts a series of economic and energy ills.

The race to select Japan's sixth leader in five years is shaping up as a battle between allies and critics of party powerbroker Ichiro Ozawa, a 69-year-old political mastermind who still wields clout despite facing trial on charges of misreporting political donations.

The successor to Prime Minister Naoto Kan, who resigned on Friday as Democratic Party of Japan (DPJ) leader after months of criticism of his response to the March tsunami and the nuclear crisis it triggered, faces a mountain of challenges.

The next leader must grapple with a resurgent yen that threatens exports, rebuild from the disaster, forge a new energy policy while ending the world's worst nuclear crisis since Chernobyl, and find funds to pay for the bulging social welfare costs of an ageing society while reining in public debt already twice the size of the $5 trillion economy.

The impression that power struggles, not policies, are dominating the race risks further denting support for the Democrats, who swept to power in 2009 promising change. Their ratings have sagged due to policy flipflops, indecision and charges of a bungled response to the disasters.

In a debate on Saturday, all five ruled out immediate tax increases to fund reconstruction for fear of hurting a fragile recovery, but Noda left the door open to future rises.

All agreed that the decades-old Japan-U.S. security alliance is the pillar of Japan's diplomacy while urging better ties with Asia, but Noda warned against a rising China.

"Next year is a period of changes with a transition of leadership. They could meddle to fan nationalism," Noda told a news conference in apparent reference to Beijing.

Maehara, a security hawk, says beating deflation is a top priority, is the most popular with ordinary voters. An Asahi newspaper poll published on Saturday showed that 40 percent of voters surveyed preferred the 49-year-old lawmaker.

Only DPJ lawmakers can vote in the party poll, so Maehara faces a tough battle against Kaieda, 62, who on Friday secured the backing of Ozawa -- who heads the DPJ's biggest group -- and his ally, former prime minister Yukio Hatoyama.

To break deadlock in a divided parliament where opposition controls the upper house and can block bills, Maehara called for forming a "grand coalition" with opposition parties, drawing a stark contrast with Kaieda, who said he opposed the idea.

The outlook for a victory by Maehara, who stepped down as foreign minister in March after admitting he had unknowingly accepted donations from a Korean resident of Japan, is also clouded by Noda's candidacy, since their support bases overlap.

Accepting funds from foreign nationals is illegal if done so knowingly. Maehara said on Saturday that he had received a total of 590,000 yen ($7,676) in contributions from four foreign individuals and a firm headed by a foreigner between 2005 and 2010, but was unaware of the donations or that the firm in question was headed by a foreigner, Japanese media reported.

If no candidate wins a majority in an initial vote, the two top candidates will square off in a second round and media said both Maehara and Kaieda were already jockeying to woo backing from other candidates if that happens.