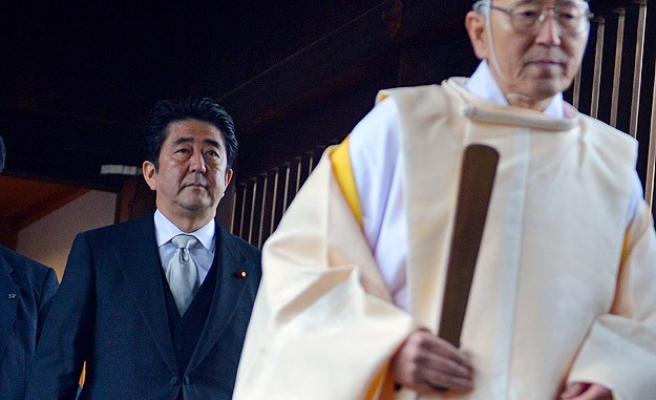 Japanese Prime Minister Shinzo Abe on Friday sent a ritual offering to a Tokyo shrine to war dead, triggering angry criticism from China and South Korea despite his decision not to visit the shrine in person as he seeks a Sino-Japanese summit.

His offering to the Yasukuni Shrine on the 69th anniversary of Japan's defeat in World War Two still angered South Korea and China, where bitter memories linger of Japan's actions before and during the war.

Abe visited the shrine in December, sharply chilling ties with China and South Korea. By sending an offering on Friday, Abe appeared to be trying not to worsen tensions with both nations while upholding a conservative ideology that takes a less apologetic tone towards Japan's wartime past.

Koichi Hagiuda, an Abe aide and lawmaker, presented the ritual offering, which was made in Abe's name as leader of the ruling Liberal Democratic Party (LDP).

"He wants to express his respect and to pay homage to the people who sacrificed their lives for the nation, while praying for a lasting peace," Hagiuda told reporters.

China criticised Abe's offering as well as the visits by the other Japanese cabinet members to the shrine, saying it "resolutely opposes" the commemoration.

"The Yasukuni Shrine is a symbol and spiritual tool of Japanese militarism," Chinese Foreign Ministry spokeswoman Hua Chunying said in a statement on the ministry's website.

"Only when Japan earnestly faces up to and deeply reflects on its history of aggression and completely makes a clean break from militarism, can it be possible for Sino-Japanese relations to achieve a healthy and stable development," Hua said.

Tokyo had hoped that by staying away, Abe would send a signal to China of his desire to ease tensions and help pave the way for a summit with Chinese leader Xi Jiping. Recent tentative moves to meet have yet to bear fruit.

But China's Xinhua news agency said in a commentary that Abe's show of "compromise and sincerity" was not acceptable.

"One who forgets and denies history does not deserve a future," it added. "It has has become a matter of urgency for the current Japanese leaders to truly reflect upon the lessons of history so as to avert a risky future."

Ties between the two nations are strained over a host of issues, included a territorial row over a set of remote islands and China's declaration late last year of an air defence identification zone (ADIZ) in the East China Sea.

Beijing and Seoul have also criticised Abe's government for backing away from its post-war pacifism, by easing weapons export restrictions and ending a ban that has kept the military from fighting abroad.

On Friday, Abe visited a non-controversial national cemetery for unidentified Japanese war dead but around 83 members of parliament, including LDP policy chief Sanae Takaichi, paid their respects at Yasukuni. More than 100 sent aides.

"We must carve out the future of this country for current as well as future generations as we face history with humility and engrave its lessons deeply into our hearts," Abe said at an annual memorial ceremony also attended by Emperor Akihito.

"Our government has urged Japanese leaders to correctly recognise history ... " she said in a speech.

"The relationship between South Korea and Japan can be developed steadily when Japan solves these matters in the proper way, and then the two nations can sincerely celebrate the 50th anniversary of the normalisation of diplomatic relations between the two countries next year."

The shrine honours 14 Japanese leaders convicted as war criminals by an Allied tribunal, as well as Japan's war dead.

Two cabinet ministers visited the shrine within hours of its giant gates opening, joining other lawmakers and scores of ordinary people.

"I think it's natural to pay homage to the people who sacrificed their precious lives for this country," said Keiji Furuya, whose portfolios include the National Public Safety Commission, told reporters at the shrine.

"I am a member of parliament but I am also a Japanese citizen, so while praying for world peace I offered my respects."

School children, businessmen and elderly people in mourning clothes bowed their heads and prayed under a blazing sun amid the buzz of cicadas. Men in military uniforms marched behind a Japanese flag and a banner honouring the Emperor.