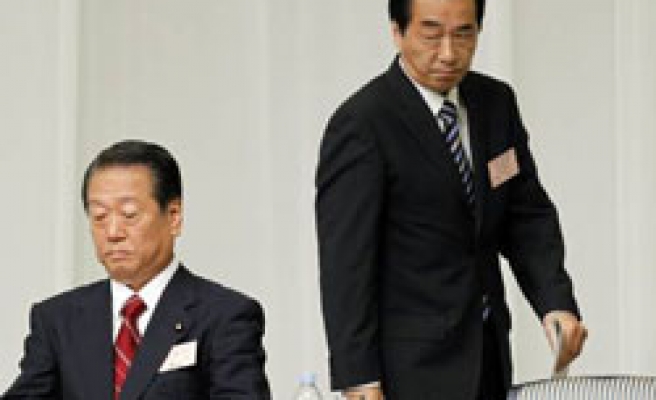 Kan remains head of the ruling Democratic Party of Japan (DPJ) and prime minister because of the party's parliamentary majority.

Kan, 63, who has promised to curb spending and cap borrowing, is already struggling with a strong yen, a fragile recovery and public debt that is twice the size of Japan's $5 trillion economy.

Markets had been braced for a shift towards more aggressive spending if Kan lost to Ichiro Ozawa, a scandal-tainted powerbroker who had said he would consider issuing more debt if the economy worsened.

The Democratic Party of Japan (DPJ) has floundered since sweeping to power a year ago, and the DPJ and a tiny partner lost their upper house majority in a July election. Kan took over in June as Japan's fifth leader in three years.

"If people trust the Democratic Party, they can understand policy proposals even if they are tough," Kan had said in a speech ahead of the vote. "We can overcome deadlock only when we can get the public to trust this party."

Kan, who is expected to reshuffle his cabinet, has vowed to cap spending and debt issuance to rein in huge public debt. He also wants to debate raising the 5 percent sales tax to fund the growing social welfare costs of a fast-ageing population.

Kan's team has repeatedly expressed concern about the yen's climb to 15-year highs against the dollar but so far has refrained from stepping into the market.

The DPJ last year ousted the long-dominant Liberal Democratic Party (LDP), ending more than 50 years of nearly non-stop rule by the conservative party, but the government's popularity plunged under Kan's predecessor Yukio Hatoyama over a failure to get rid of unpopular US base on Japanese island.