In a phone call, Abe and Russian President Putin agreed a visit will take place at an 'appropriate time' 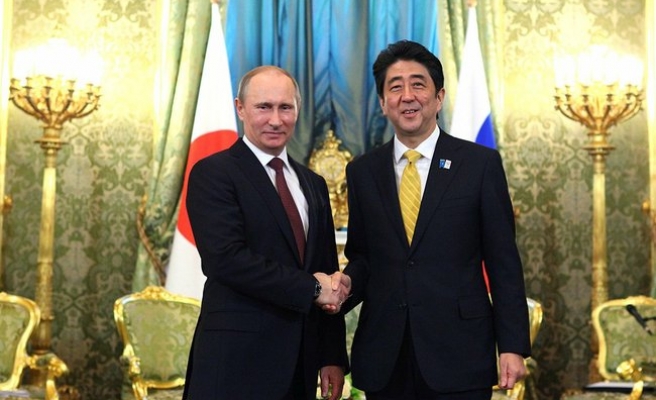 Prime Minister Shinzo Abe and Russian President Vladimir Putin agreed Friday to arrange a visit to Moscow by the Japanese leader, despite a long-running deadlock over a decades-long territorial dispute.

Japan-Russia relations have been hampered by the territorial row that dates back to the end of World War II when Soviet troops seized the four southernmost islands in the Kuril chain, known as the Northern Territories in Japan.

In a phone call, Abe and Putin agreed a visit will take place at an "appropriate time," Japan's foreign ministry said in a statement, though it did not specifically mention the island dispute -- the key impediment to better relations.

Putin could also visit Japan after Abe's trip to Russia, the ministry added.

Over the years leaders of both countries have met several times to discuss the row, but Russia and Japan have never officially reached an agreement, and lingering tensions have hampered trade ties for decades.

At a news conference earlier this month, Abe renewed his call for progress on the elusive World War II peace treaty, stressing that the territorial issue "cannot be resolved without exchanges between the leaders," referring to himself and Putin.

Despite a lack of progress on the territorial row, the Japanese leader said in an interview this week that Moscow's help is needed to resolve crises in the Middle East.

It formerly included Russia under a G8 configuration, but Moscow was evicted following the annexation of Crimea from Ukraine.

The leaders' phone call comes as Russia is accused of propping up Syrian President Bashar al-Assad, and is at odds with Western powers who say Moscow is indiscriminately bombing Syrian opposition forces fighting the Islamic State group.

The Kremlin confirmed the phone call, which it said was initiated by Japan.

"The development of the Russian-Japanese ties has been discussed in detail," Moscow said.

Abe informed Putin that the Japanese government on Friday set up a new diplomatic post to focus on talks with Russia.