Hiroshima, just like Japan as a whole, had been careful not to let the wartime trauma influence the debate about the merits of nuclear energy. 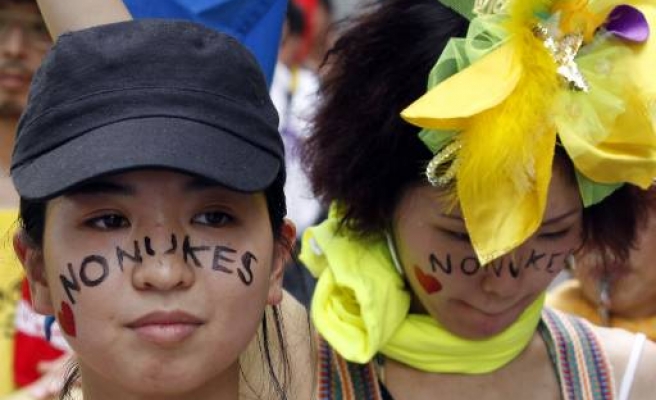 Prime Minister Naoto Kan vowed on Saturday to challenge the "myth of safety" of nuclear power while marking the 66th anniversary of the atomic bombing of Hiroshima, a city that has now started questioning its long embrace of nuclear energy's peaceful use.

Kan, speaking at a ceremony devoted to the victims of the bomb that killed more than 100,000, repeated that the meltdowns at the Fukushima plant after a March earthquake convinced him Japan should aim to end its dependence on nuclear power.

Hiroshima, just like Japan as a whole, had been careful not to let the wartime trauma influence the debate about the merits of nuclear energy and the nation's passionate rejection of nuclear weapons has been separated from its attitudes to nuclear industry.

But its mayor's plea for a revamp of the nation's energy policy at such a symbolic place and time may signal that this is changing.

Kazumi Matsui, a son of an atomic bomb survivor, said the Fukushima crisis has traumatised the public and Tokyo needed to act to regain public trust.

"The Japanese government should sincerely accept this reality and review its energy policy quickly," he said during a ceremony held around 8:15 a.m. (2315 GMT), the time the U.S. B-29 warplane Enola Gay dropped the atomic bomb on the city on Aug. 6, 1945.

It was the first time in decades that any Hiroshima mayor has questioned Japan's decades-long policy of developing nuclear power during the annual ceremony.

Matsui said it was heartbreaking to see the devastation left by the March 11 earthquake and tsunami and how it resembled what was left of Hiroshima after the bombing.

This western industrial city of 1.2 million every year honours thousands who perished in the attack and many more who died of radiation exposure observing a minute of silence, tolling a peace bell and releasing hundreds of doves into the air.

The bomb, nicknamed "Little Boy", released a mix of shockwaves, heat rays and radiation. The death toll by the end of 1945 was estimated at about 140,000 out of the total 350,000 that lived there at the time.

Three days after the attack on Hiroshima, the United States dropped a second atomic bomb on the southern city of Nagasaki. Japan surrendered six days later.

Japan, the only country to suffer atomic bombs, has a self-imposed ban against nuclear arms, part of its pacifist post-war constitution.

But even many anti-nuclear groups have been careful not to draw parallels between what happened in Hiroshima and Nagasaki and dangers posed by the peacetime use of nuclear reactors.

Prior to the Fukushima crisis, nuclear energy accounted for nearly a third of Japan's energy supply and Hiroshima had for decades relied on utility firm Chugoku Electric's Shimane nuclear power plant, some 600 km (370 miles) west of Tokyo, for much of its electricity.

But since the March earthquake and tsunami knocked out power at the Tokyo Electric Power Co's Fukushima plant 240 kilometres (150 miles) northeast of Tokyo, triggering radiation leaks and contamination fears, public sentiment has shifted.

"We hadn't thought so deeply about it until now. But I think it (nuclear plant) is not so different from the atomic bomb," said Michiko Kato, a 73-year-old survivor who lost her sister to the bomb.

"There is nothing made by human beings that is perfect... I don't want to use anything like this."

Recent polls showed about 70 percent of voters sided with Kan's vision of nuclear-free Japan and local communities are wary of restarting reactors shut down for regular maintenance and inspection, despite fears of power shortages.