Politics in Okinawa, where many residents associate the U.S. military bases with crime, accidents and noise pollution, often operate on different dynamics than elsewhere in Japan 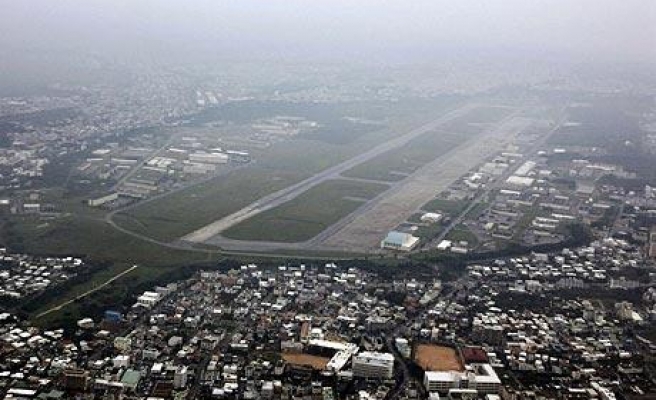 A candidate backed by Japanese Prime Minister Shinzo Abe's party was soundly defeated in a key local election on Sunday, a blow to plans to relocate a controversial U.S. air base on Okinawa island, home to the bulk of U.S. military forces in Japan.

Delays in relocating the U.S. Marines' Futenma air base have long been an irritant in U.S.-Japan relations. Abe is keen to make progress on the project as he seeks tighter security ties with Washington in the face of an assertive China.

Nakaima, who ran with the backing of Abe's Liberal Democratic Party, had approved a U.S.-Japan plan to relocate Futenma to a less populous part of the island.

Onaga, a conservative who once supported the base move to coastal northern Okinawa, later changed his mind to say he wanted it out of the prefecture. His platform was also critical of other Abe policies, such as the use of nuclear power.

Describing his victory as "a new page in history", Onaga told reporters: "I am determined to work toward cancelling and withdrawing it (the relocation plan)," Kyodo reported.

Abe's government has insisted the plan will go ahead regardless of the outcome of the local election, but the results add new uncertainty to the outlook for the long stalled project.

Last year, when Nakaima approved the plan, Washington welcomed it as an important step in efforts to bolster U.S.-Japan ties and rebalance Washington's foreign policy toward Asia

Tokyo and Washington first agreed to relocate Futenma to another site on the island in 1996, but the plan has stalled in the face of opposition by many residents, who associate the U.S. bases with crime, noise pollution and accidents.

Opponents want the U.S. military to leave Okinawa altogether. The southern island, which accounts for less than one percent of Japan's land mass, hosts more than half of the 47,000 U.S. service personnel stationed in the country.

Futenma, located in a densely populated area, has been a lightning rod for local opposition.

Nakaima's loss is a headache for Abe, but was unlikely to affect his expected decision to postpone an unpopular sales tax hike and call a snap election to try to secure his grip on power while his voter support is still relatively robust.

Ruling party politicians have said Abe could announce as early as Tuesday that he will delay a planned rise in the sales tax to 10 percent from next October and call a general election for Dec. 14.

Abe returned to power in December 2012 pledging to revive the economy with a mix of hyper-easy monetary policy, spending and reforms. Opposition politicians say delaying the tax hike would show that his "Abenomics" growth strategy has failed.