Japan says no concessions in islet spat with China

Japan will make no concessions on sovereignty over Pacific islets also claimed by China, but will not make any moves to escalate the situation 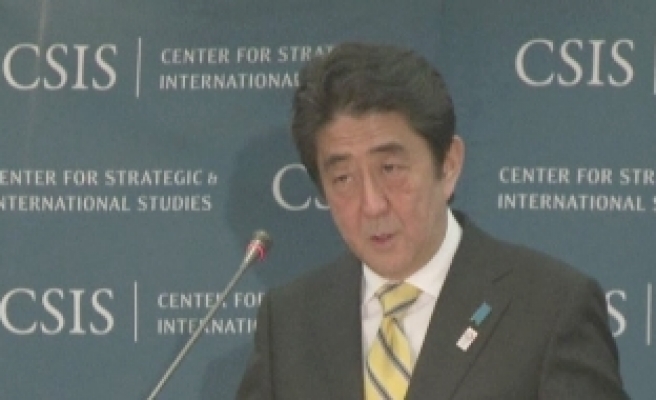 Japan will make no concessions on sovereignty over Pacific islets also claimed by China, but will not make any moves to escalate the situation, Prime Minister Shinzo Abe said on Friday.

Tokyo is locked in a territorial dispute with Beijing over a group of East China Sea islets, called the Senkaku in Japan and Diaoyu in China. They have become a theater for cat-and-mouse operations by patrol vessels from both sides.

"The intrusions by Chinese government vessels in our territorial waters are continuing, to our regret. However, Japan will not make a concession on our territorial sovereignty," Abe told a news conference in New York.

"We do not intend to escalate this issue any further. We have been dealing with this issue calmly and resolutely and we shall continue to do so."

Abe, visiting New York for the annual United Nations General Assembly, told reporters that he told Chinese President Xi Jinping during a brief meeting at the G20 summit in Russia this month that the two sides should restore dialogue.

"We should not close the doors to dialogue because there is a problem. Rather the existence of issues warrant a good discussion among the high-level officials of both governments," Abe said. "The door to dialogue is always open and I really hope the Chinese side would take the same mindset."

Chinese Foreign Minister Wang Yi, in a speech to the U.N. General Assembly on Friday, did not mention Japan by name, but said he hoped to resolve territorial disputes "through negotiation and consultation with countries directly involved."

"Those disputes that cannot be resolved now can be shelved for future resolution," he said.

In addition to the East China Sea dispute with Japan, China has disputes over islands and waters in the South China Sea with the Philippines, Vietnam, Malaysia and Brunei.

The uninhabited islands under dispute between China and Japan are near rich fishing grounds and potentially large oil and gas reserves.

They are administered by Japan, but Chinese paramilitary vessels approach them routinely in what is seen as Beijing's effort to challenge Japan's control.

Taiwan also claims the islands, but Taipei and Tokyo struck a fishing agreement in April covering the waters around the islands that has eased tensions.