Finance Minister Yoshihiko Noda, who favours paying for bulging social security costs by raising the 5 percent sales tax, and like Kan sees reining in ballooning public debt as policy priority, is mooted as a leading contender. 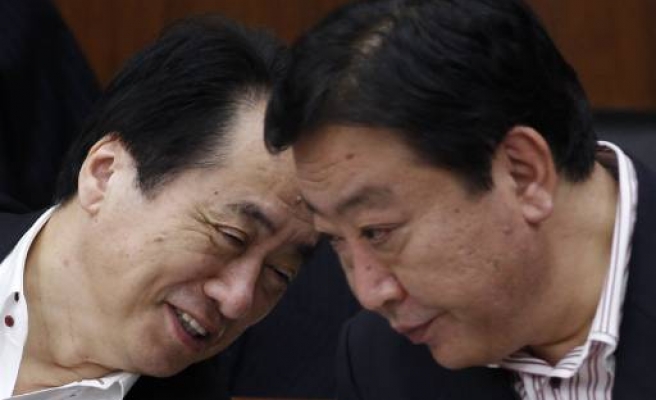 Prospects grew on Wednesday that Prime Minister Naoto Kan would resign this month, setting the stage for the selection of Japan's sixth leader in five years as the country struggles to rebuild from a massive tsunami, forge a new energy policy in the wake of a nuclear crisis and fix tattered state finances.

With two key bills that Kan wants to make into law before he goes looking likely to be enacted before parliament's session ends on Aug. 31, Japanese media said Kan's Democratic Party was planning to vote as early as Aug. 28 to select a new leader.

Finance Minister Yoshihiko Noda, who favours paying for bulging social security costs by raising the 5 percent sales tax, and like Kan sees reining in ballooning public debt as policy priority, is mooted as a leading contender.

How to pull the world's third-biggest economy out of deflation could become a focal point of the party race, with some potential contenders calling for more aggressive loosening of monetary policy and wary of a government plan to double the sales tax to 10 percent by mid-decade.

But questions remain whether a change at the top will resolve the political stalemate born of Japan's divided parliament, where the opposition controls the upper house and can block legislation.

Some analysts have expressed hope that replacing Kan, whose policy flip-flops and abrasive personality have irked both ruling and opposition lawmakers, would allow smoother cooperation with the opposition.

"There are a lot of things going on in both (main ruling and opposition) parties that mean it is possible that more effective government could happen," said Chuo University professor Steven Reed.

Others are pessimistic about chances for bold, visionary policies needed to cope with excessive debt, a fast-ageing population, rebuilding from the March disasters and drawing up a new energy policy in the wake of the nuclear crisis.

The Democrats swept to power in 2009 riding a wave of voter discontent and hunger for change after half a century of nearly unbroken rule by the conservative Liberal Democratic Party (LDP). But the novice party has struggled to fulfil campaign pledges including a promise to put more cash in the hands of households rather than companies, and halfway through their term are now trailing the opposition in terms of voter support.

Kan has set three conditions for keeping his pledge to resign. One of those conditions, the enactment of an extra budget to help fund recovery from the massive March earthquake and tsunami, has already been met.

A second condition -- passing a bill allowing the government to borrow more to fund this year's $1 trillion budget -- now looks all but certain to be met by the end of the month after the Democrats agreed on Tuesday to rethink key campaign spending pledges as demanded by opposition parties in return for passage of the legislation.

The funding bill was approved by a committee in parliament's lower house on Wednesday, clearing the way for passage by the full chamber the following day and the upper house later this month.

Kan, who is advocating Japan wean itself from reliance on nuclear power, also wants parliament to pass a law promoting renewable sources of energy such as solar power before quitting.