As Talas moves on, heavy rain is expected in the north of the country, though JMA warned residents of the west to remain on alert for landslides. 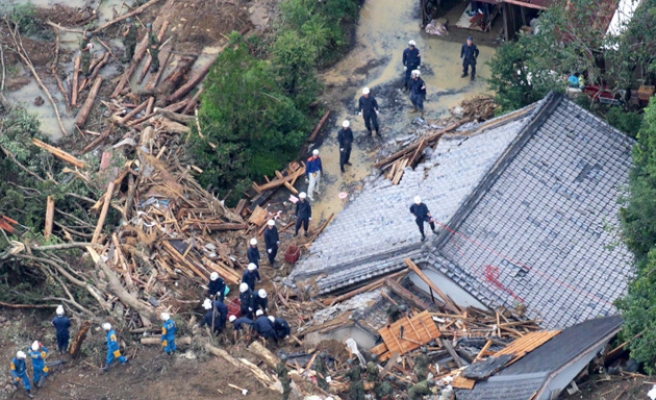 Japan's death toll from tropical depression Talas, earlier downgraded from a tropical storm, has risen to 25 with 52 missing, the government said on Monday, as torrential rain pounded the west of the country at the weekend, triggering mudslides and bursting river banks.

Talas, which cut through Japan's main island on Saturday and Sunday, was off the country's western coast as of 9:00 a.m.(0000 GMT), heading northeast, the Japan Meteorological Agency (JMA) said.

There were no reports of major disruption to factory operations and Tokyo Electric Power Co said its tsunami-crippled Fukushima Daiichi nuclear power plant, located in eastern Japan, has not been affected by the storm.

Talas has mostly moved at about 10 km per hour (6 mph), roughly the speed of a bicycle, and its slow progress caused heavy and prolonged rainfall over Japan, the agency said.

"We'll do our utmost in terms of search and rescue operations," Prime Minister Yoshihiko Noda told reporters when asked about the disaster.

As Talas moves on, heavy rain is expected in the north of the country, though JMA warned residents of the west to remain on alert for landslides.