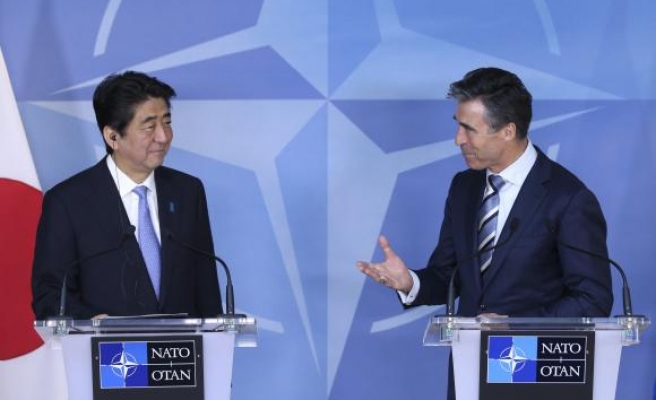 The accord, signed by Abe and NATO Secretary General Anders Fogh Rasmussen during Abe's visit to NATO's Brussels headquarters, will deepen Japan's cooperation with the Western military alliance in areas such as counter-piracy, disaster relief and humanitarian assistance.

After addressing ambassadors from the 28 NATO nations, Abe drew a parallel between the situation in Ukraine, where Russia has occupied and annexed Crimea, and Asia, in an apparent allusion to a standoff between Beijing and Tokyo over tiny uninhabited islands in the East China Sea known as the Senkaku in Japan and the Diaoyu in China.

Abe urged Russia and Ukraine's political parties to recognize the legitimacy of Ukraine's May 25 presidential election, which the West sees as crucial to help stabilize Ukraine after weeks of worsening violence that Western officials accuse Russia of helping to stir up.

"At the same time, in order to resolve this problem, we have to have dialogue with Russia," Abe said.

NATO has said it will not get involved militarily in Ukraine but it has reinforced security in eastern European members of NATO that are worried by Russia's renewed assertiveness.

In addition to steps it has already taken to deploy more planes, ships and troops to eastern Europe, NATO would "not hesitate to take further steps if necessary to ensure effective defense and protection of our allies," Rasmussen said.

Abe, who made his first visit to NATO headquarters in 2007, has long been interested in strengthening Japan's relations with the U.S.-dominated Western alliance.

"Japan does not actually expect NATO to play a direct military role in the Asia-Pacific region, but it does expect allies to share perceptions and approaches," Michito Tsuruoka, a senior research fellow at Japan's National Institute for Defense Studies, wrote in a paper for the NATO Defense College last year.

Tension between Japan and China spiked last year when Beijing announced an air-defense zone over a wide area including the disputed islands.

Abe told NATO ambassadors he believed Japan should play a more active role in defending the freedom of overflight and navigation.

With its operations in Afghanistan coming to an end and Russia flexing its muscle, NATO is now expected to refocus on its core mission of defending its territory, a trend that may not be welcome to Japan and other partners outside NATO's area.

Abe's priority has been to revive a long-sluggish economy, but he has also pledged to strengthen Japan's military and boost its security profile to meet what he says is a threat from China's rapid military buildup.

Abe also aims to lift Japan's ban on collective self-defense, which means helping an ally under attack, to bolster security ties with the United States.