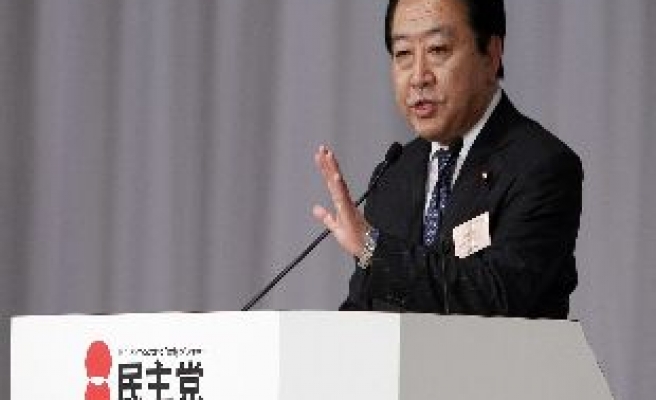 Noda, 54, who defeated Trade Minister Banri Kaieda in a run-off vote, must cope with a resurgent yen that threatens exports, forge a new energy policy while ending the worst nuclear crisis since Chernobyl, and find funds to rebuild from the March 11 tsunami at a time when huge public debt has already triggered a credit downgrade.

Financial markets, political commentators and the Japanese public are sceptical whether the new leader will have the vision, determination and time to tackle those challenges.

Bond markets are expected to welcome the choice of Noda, who among the candidates has been the only one consistently calling for Japan to face painful reforms to rein in the country's ballooning debt.

Government bond futures nudged higher after Noda made it into the second round of voting although the Topix share index erased its gains after he won the final vote.

"Let's do the utmost to tackle what we have promised and if there's not enough money, we might ask the people to share the burden," Noda said before the vote, in a reference to future tax hikes.

Like Kan, the new leader -- to be formally voted in by parliament on Tuesday -- faces a divided legislature and internal party rifts, raising concerns that he will join a gallery of short-lived prime ministers.

No Japanese prime minister has lasted much more than a year since 2006 and most market players polled by Reuters this month thought the next government head would be no exception.

In a rare moment of levity ahead of the vote, the jowly Noda compared himself to a "dojo" loach fish -- an eel-like denizen of the deep.

"I do look like this and if I become prime minister, the support rate would not rise, so I would not call a snap election. A loach has its own abilities even though it cannot do as a goldfish does."

The results were announced by a party official after paper ballots were fed into a counting machine.

Noda has said Japan should not build new nuclear reactors, effectively phasing out nuclear power over 40 years, although he wants to restart off-line reactors after safety checks to avoid a power crunch. Japan relied on nuclear power for about 30 percent of its electricity before the Fukushima crisis.

Sceptics worry whether Noda will last any longer than his five predecessors, each of whom left office after about a year.

Moody's Investors Service cut Japan's sovereign credit rating last week citing a buildup of public debt and a lack of leadership and a long-term strategy to cope with its fiscal challenges.

Instead of a deep debate over how to end Japan's decades of stagnation and revitalise the world's third-biggest economy, the leadership race had turned into a battle between allies and critics of Ichiro Ozawa, a 69-year-old political mastermind who heads the party's biggest group even as he faces trial on charges of misreporting political donations.

Defeated candidate Kaieda was backed by Ozawa, while Noda was supported by his critics.

One of the new leader's first challenges will be seeking opposition help in parliament, where the opposition controls the upper house and can block legislation. Noda has floated the idea of a "grand coalition" with opposition rivals -- although the two biggest opposition groups have been cool.